RECIPE: Spumoni Almond Cake and How Driving can be Creative 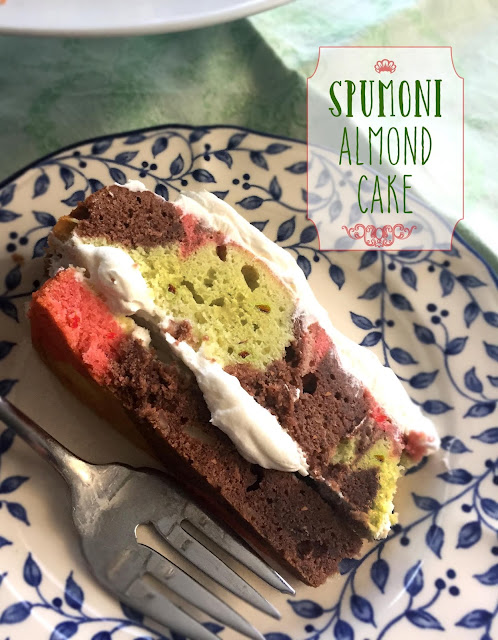 Once you become a parent, you are in the car a lot more. After you have your baby, the hospital should make sure your driver's license is all up to date for your "road ahead".

And if you are in a busy city like I am, the traffic is atrocious, making driving a mind-numbing chore. On a positive note, driving so much has guided me to my love of podcasts. They have become my imaginary passengers in my car rides, making the horrible chore of navigating the disturbing driving habits of Chicago drivers bearable. (Seriously, the self-importance of a person forcing a U-turn in bumper to bumper traffic to get a parking spot on the other side of the street inconveniencing everyone else around them has to be of epic proportions.)

Driving I have also found to be a place where ideas come. Sitting in traffic allows your mind to go into a wandering mode, like doing dishes or mowing the lawn. It's this kind of active mind activity that allows the right part of your brain to do some creative problem solving and "playing". You aren't being distracted with a lot of inputs and the chore is rote and mindless.  SO driving makes for productivity. It's why I have a small notepad by the driver's seat. But it can also cause near accidents...when I have to write an idea down on paper going 60 miles an hour.
*cough* I digress again.

SO what does cake have to do with driving?
This spumoni cake idea came to me driving my kid to school. I played with watermelon flavored jello last summer to make amazing watermelon cookies. I thought that I could combine all the flavors of spumoni, and craft the cake in a way to look like spumoni ice cream.

It turned out perfectly! My husband had a second helping last night. This baby won't last long in our fridge. I kept the filling and topping very simple, allowing the flavors of the cake to come through. But you can use a more traditional vanilla buttercream if you wish. I just felt in the spirit of "ice cream", the creamier texture would give a better spumoni vibe. It also looks like a giant sundae.

Have fun with it! And PSA for today, be safe with your creative problem-solving while driving.  Always pull over before you write anything down or take a note on your phone.
Now get baking!

Heat oven to 375˚. Spray a 10" cake pan with nonstick cooking spray. Cut parchment paper to size and lay the paper on the bottom of the pan, and spray again. Set aside.

Sift the flour with the baking powder. Set aside.

In a large bowl, whip the butter with a mixer. Chop the almond paste, or roughly grate it with the large hole side of a bell grater. Add the paste to the butter, and whip until combined. Add the sugar, and whip until the paste is as small as pistachio nuts. Add the eggs, one at a time, mixing well after each addition. Finally, add the flour ingredients alternately with the 1/2 cup of milk until just combined.

Divide the batter roughly into three bowls. In one bowl, add 1/2 box of the chocolate pudding, 1 tbsp. milk and whip until combined. Add the chopped almonds by hand. Set aside.

In the second bowl of batter, add half the box of the pistachio pudding, 1 tbsp of milk and whip until combined. Add the chopped pistachio nuts and mix by hand. Set aside.

Finally, in the last bowl of batter add half the box of cherry jello and final tablespoon of milk and whip until just combined. Add the cherry brandy and the maraschino cherries and mix by hand.

With a large spoon or spatula, dollop each batter throughout the pan randomly, layering on top of each other, until all is used and the pan is well covered. Tap the sides of pan to even out the batter, and run a dull knife through areas just a couple times to add a touch of marbling throughout without overdoing it. You still want distinct flavor areas similar to spumoni ice cream.

Bake for 60-75 minutes, until a toothpick comes out clean at the center. Let cool in pan for 5 minutes before transferring to a wire rack to cool completely.

When cool, slice cake in half horizontally. Fill the center with the whipping cream and return the cake top. Dollop the rest of the whipping cream on top and garnish with a maraschino cherry. Store in the fridge for up to 5 days.