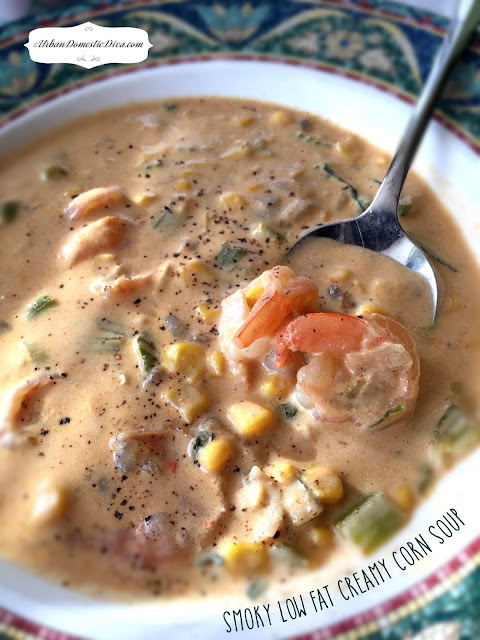 You seriously will not believe that this is a low-fat dinner once you dig in. The trick is the fat-free half and half combined with seasonings galore and a hearty shrimp broth. My hubby kept slurping it up, asking me again and again if this was going to harden his arteries or not. I kept reassuring him that it wouldn't.

This soup comes together really fast so this could be a weeknight standby for you. We enjoyed it with a light salad and some crusty bread rolls. With corn season coming in the next couple of months, I am for sure going to keep this in my repertoire. Fresh corn kernels off of the cob from the farm would make this soup even better! SO file this one under make A LOT this summer.

Heat oil in a large saucepan over medium heat. Add the onion, garlic, celery and anchovy paste, and cook until softened, about 5 minutes. Add flour, paprika, and stir until well combined, and turns into a thick paste-about 1 minutes.

Add the shrimp broth, the Old Bay seasoning, and salt. Bring to a boil and add the corn. Simmer for about 3-5 minutes, until corn is tender. Take off the heat, and whisk in the half and half. Bring back to the heat, and whisk until thickened, about 3 minutes.