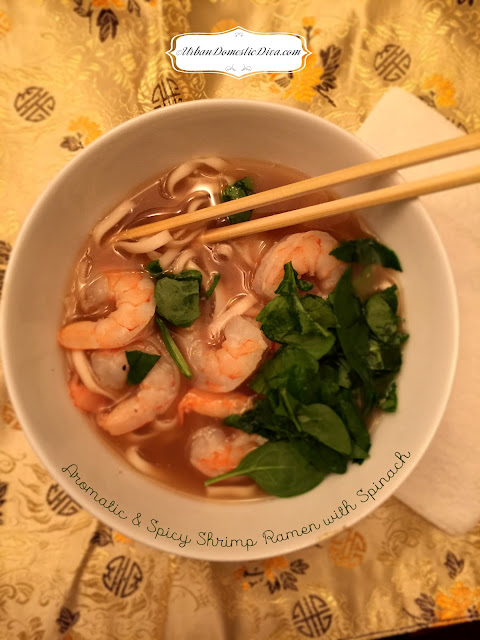 We are OBSESSED with soupy, slurpy noodle bowls of all sorts at our house since winter set in. In Chicago, we are so fortunate to have some really great ramen, soba and pho shops around the city. But ironically the first time we had giant steamy bowls of Asian noodles wasn't in Chicago, but in Toronto. We were staying near the University of Toronto campus, home to many killer, funky Asian restaurants. In fact, the best Thai we had was in Toronto. One of the coldest days in Toronto we happened to be doing some sightseeing (I know. We were crazy.) Hungry and frostbitten, we stumbled into a Japanese soba noodle shop, highly popular on Yelp. The steam billowing off of the these ginormous bowls of broth was a welcome comfort from the frigid temperatures outside. That's the beauty of big noodle bowls, they warm you up while feeding you!

Things being super cold last weekend, this recipe caught my eye. The crazy combo of aromatic spices infused in the broth and a spicy cashew paste that is also dropped in before adding the broth was very that seemed really interesting. It included a cool new ingredient for us-shrimp paste. You will need to find this in an Asian store, or a grocery that has an extensive Asian section.

The one thing that bugged me about the recipe was that it was a chicken broth base, yet shrimp was the main protein added at the end. I felt that the broth needed to either be a fish stock or have shrimp flavor infused into it. Also, I wanted to add some leafy greens to it for a healthy kick and more nutrients.

My solutions were two fold. I saved all my shrimp shells and tails after cleaning the shrimp, and added them to the broth for the whole hour and a half. Secondly, I changed the veggie toppings to be roughly torn up baby spinach. The result? An aromatic shrimpy bowl of goodness with a green veggie kick. Perfect.

Clean and devein shrimp. Reserve shells and tails, and chill the cleaned shrimp until ready to use.

Cook noodles according to package directions, usually around 3 minutes, then drain and set aside.

In a large stock pot, toast cloves, cardamom, star anise, chiles, cinnamon, and peppercorns over medium heat, tossing often, until fragrant, about 2 minutes. Add shrimp shells and tails, cilantro, shallots, garlic, lemongrass, ginger, broth, and fish sauce and bring to a boil. Reduce heat; simmer until flavors meld, 1–1 ½ hours. Strain into a large bowl, pressing on solids. Return broth to pot; season with salt and pepper. (Can be made ahead of or frozen until ready to use.)

Pulse cashews in a food processor until very finely ground. Add shallot, chile, lemongrass, ginger, brown sugar, and shrimp paste; process until smooth. Heat oil in a small skillet over medium and cook paste, stirring, until beginning to brown, about 2 minutes. (Can be made ahead, chill until ready to use.)

Bring broth to a simmer, add shrimp, and cook until just cooked through, about 2 minutes. Divide noodles among bowls. Add 2 Tbsp. paste to each and ladle broth over; stir to incorporate paste. Top with shrimp, sprouts and spinach; season with pepper. Serve with chili oil.