Crafts: Tips and Tricks on an A+ Undersea Diorama, Sunlight Zone 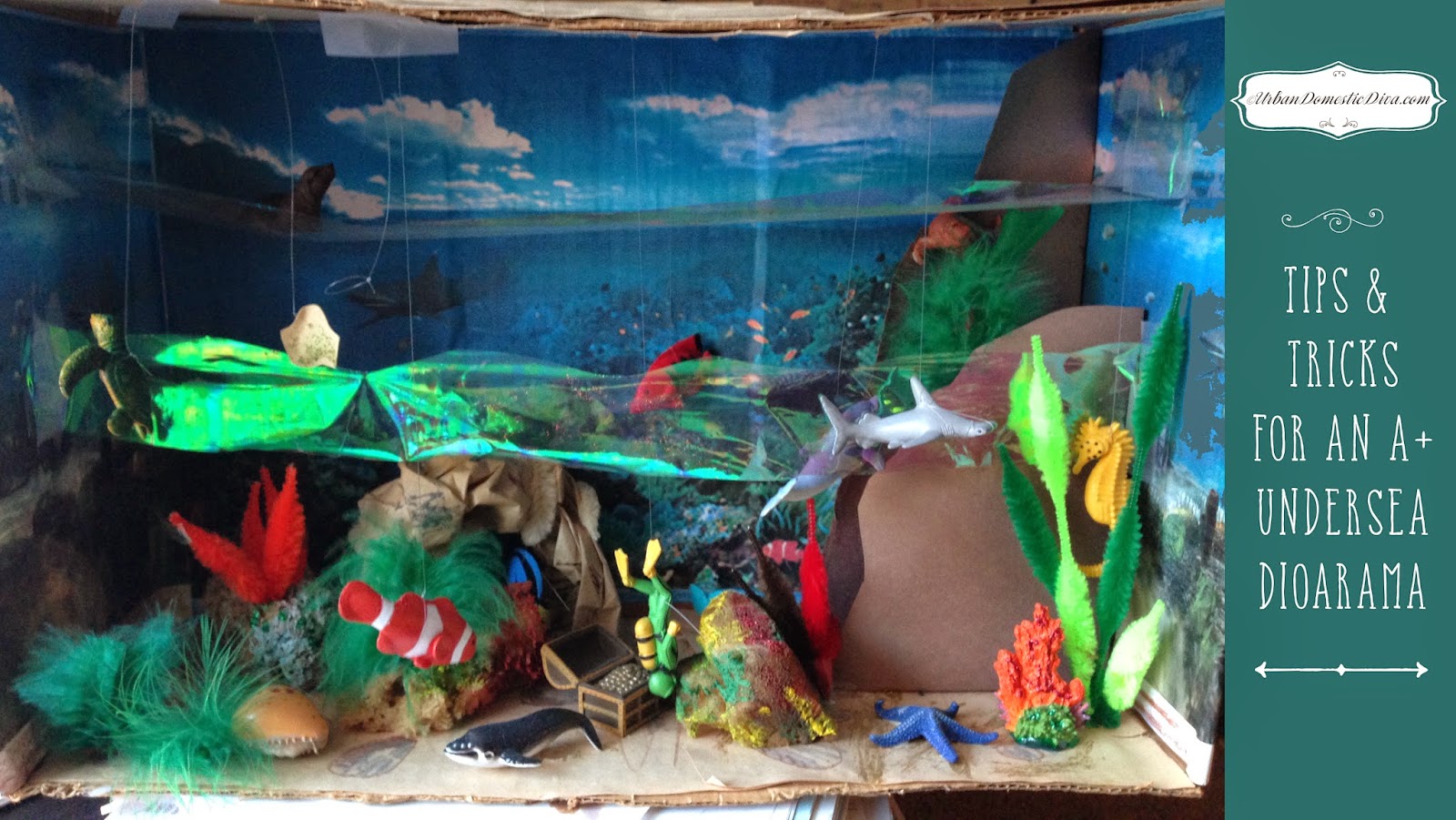 My daughter was OBSESSED with all things nautical all through elementary school. Now that she is a tweener, she is obsessed with all things digital. Oh how things go by so fast in parenting!

One of the things I felt she was making all the time for school were dioramas. So many, that we got very good at making them. This one was based on the sunlight zone of the ocean. To make a diorama similar to this, you will need to visit a craft store, print a few things off the web in color, and scrounge around your house. 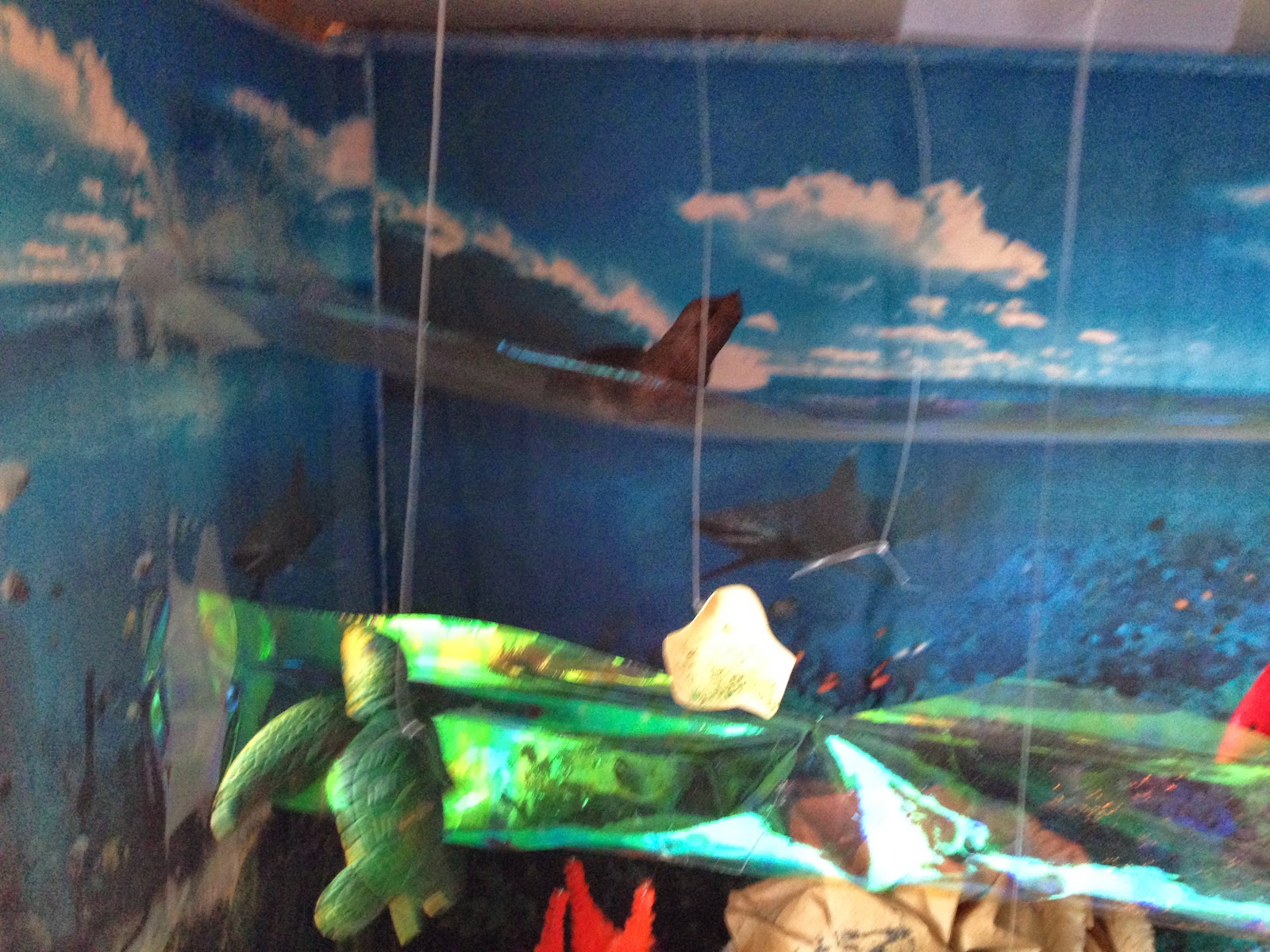 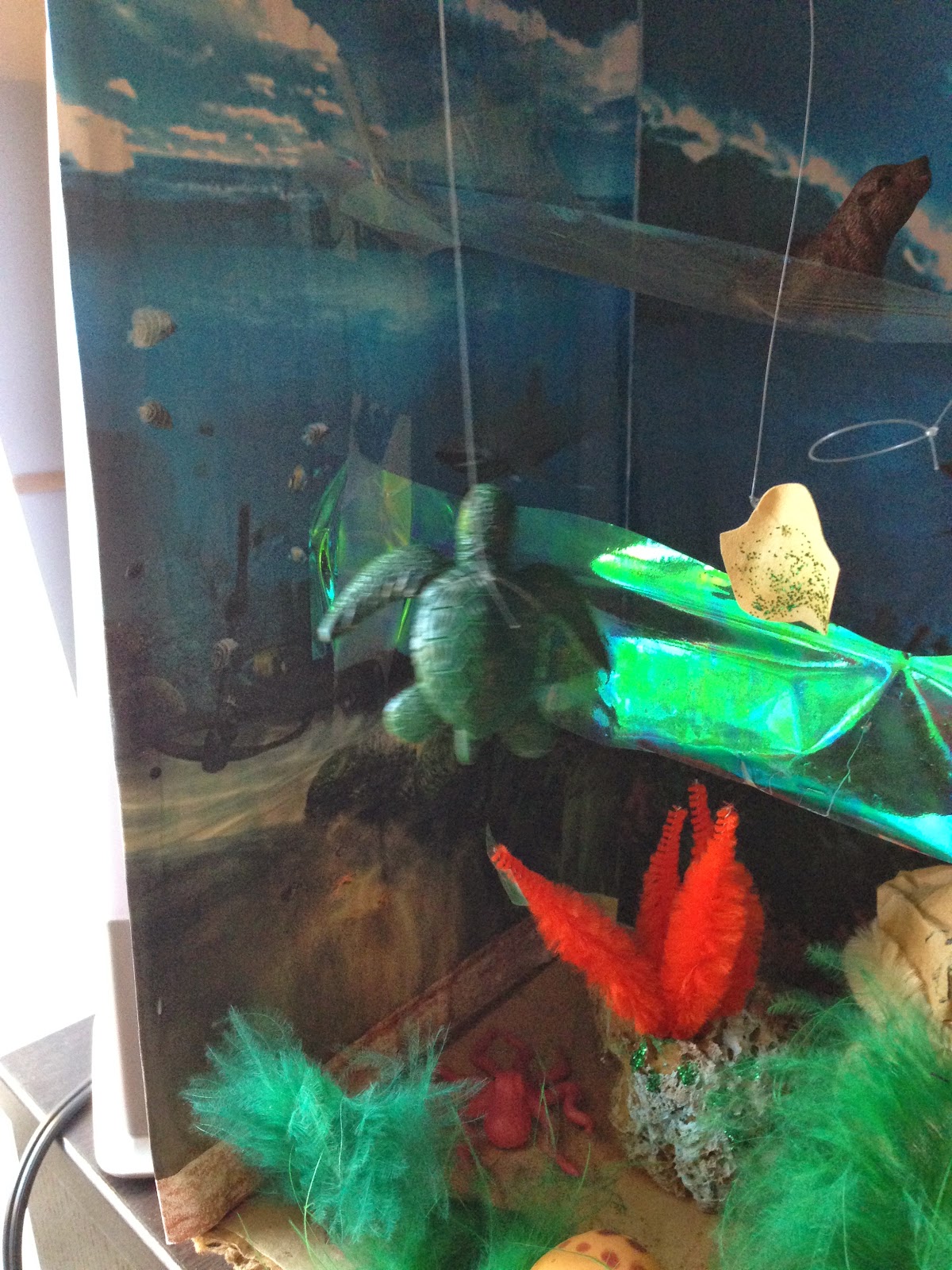 First get some color printouts of the "sunlight zone" where you can see under water, a water line and a sky. Print these large to cover the backs of the box with glue. This sets up the scene, and gives you the water line. the sunlight zone is not so deep in the water, so your student needs to show the water line. The cellophane will help you specify this too, but put that cellophane in after you build out the sea floor. Also have your student use a sand color construction paper and draw and color what lives on the sea floor. Glue it on the bottom of the box. 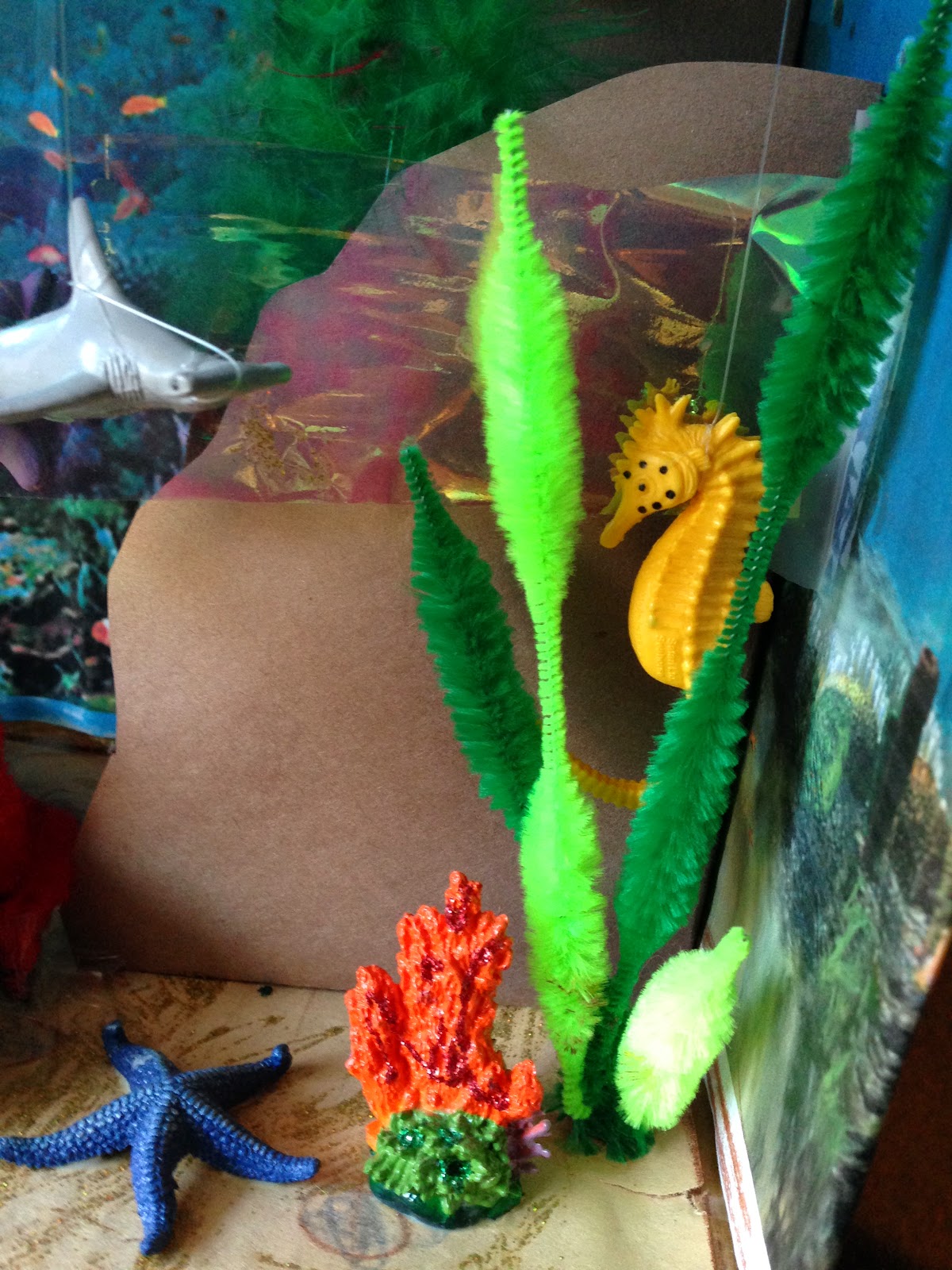 To add dimension, cut a large rock formation in construction paper, and make a folded glue tab along the side and bottom, and set it somewhere a few inches from the back. Next add "coral or grasses" by clumping wavy pipecleaners and glue them sticking up. If your TOOB has some coral, glue them down here and there too, as well as and sea life that lives on the floor or on rocks.


Feathers are a great way to show sea grasses and corals, and they move and sway as if they were really underwater. Glue them into the sea sponge "coral", and whatever rock formations you have going on. 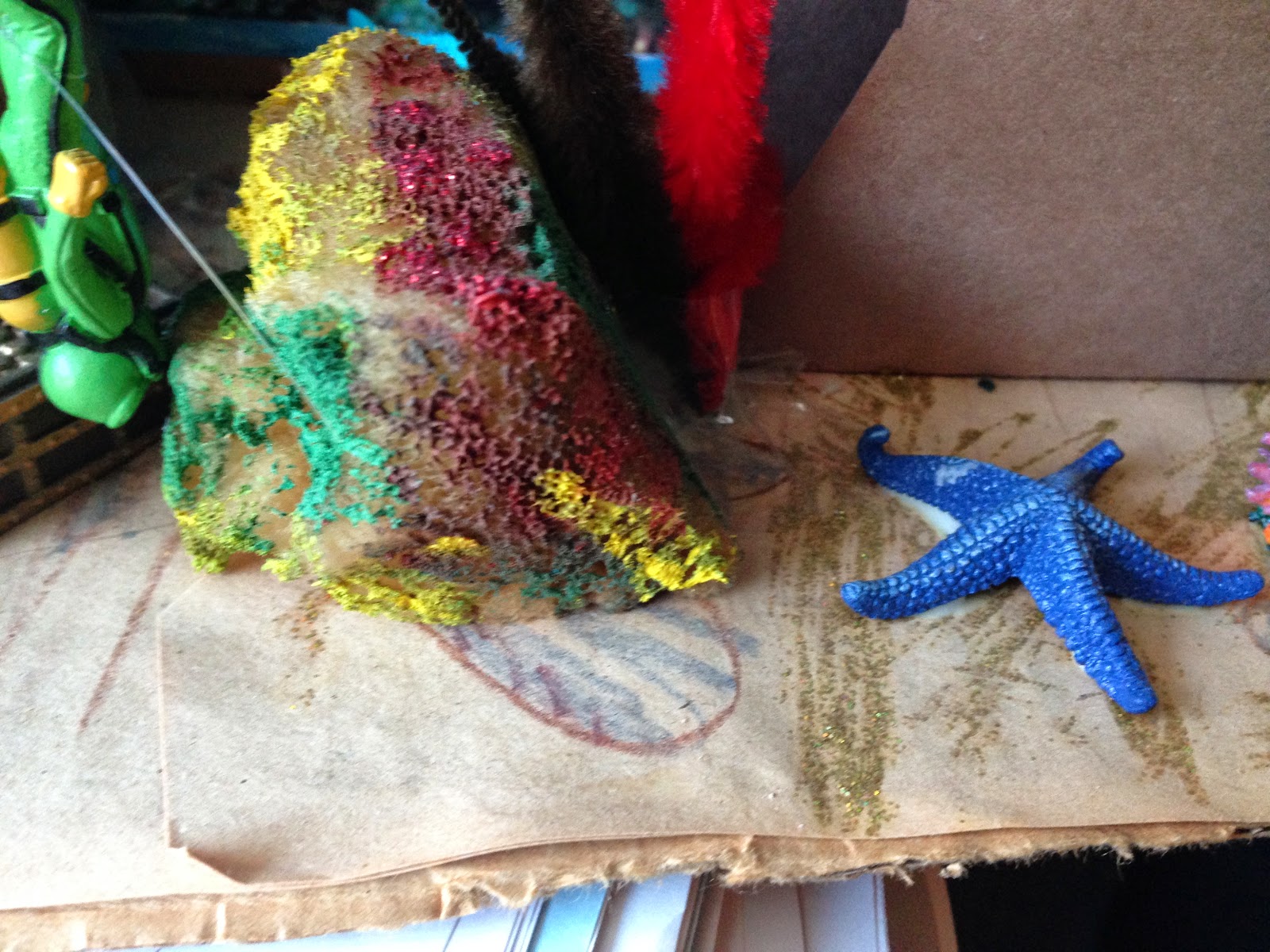 Sea sponges can look like coral beds if you paint them with watered down acrylic paint. Use them to build out coral beds, and there you can add pipecleaners or feathers on it to make a coral reef. Even add some bits of glitter glue, too for glimmer and interest. 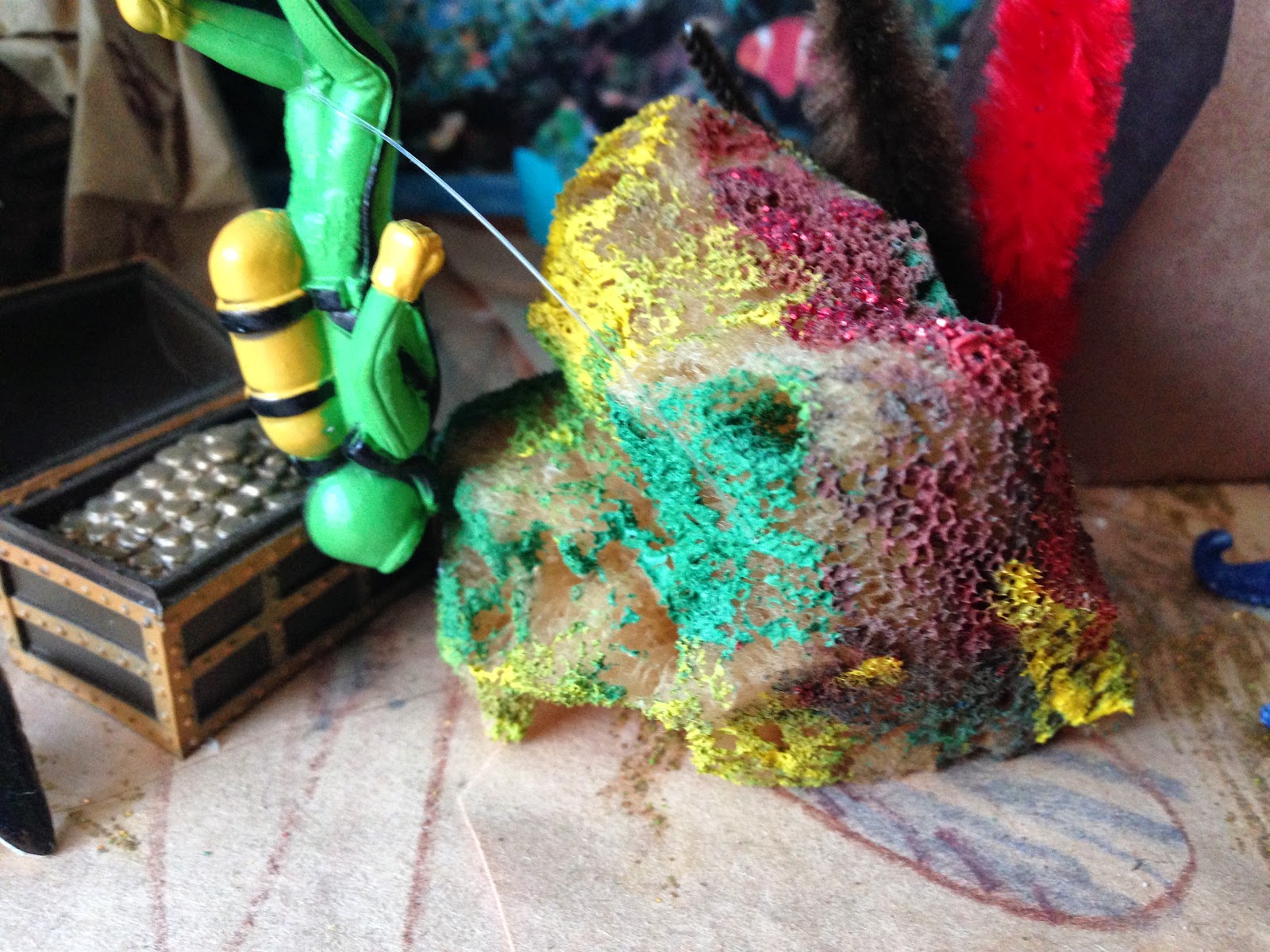 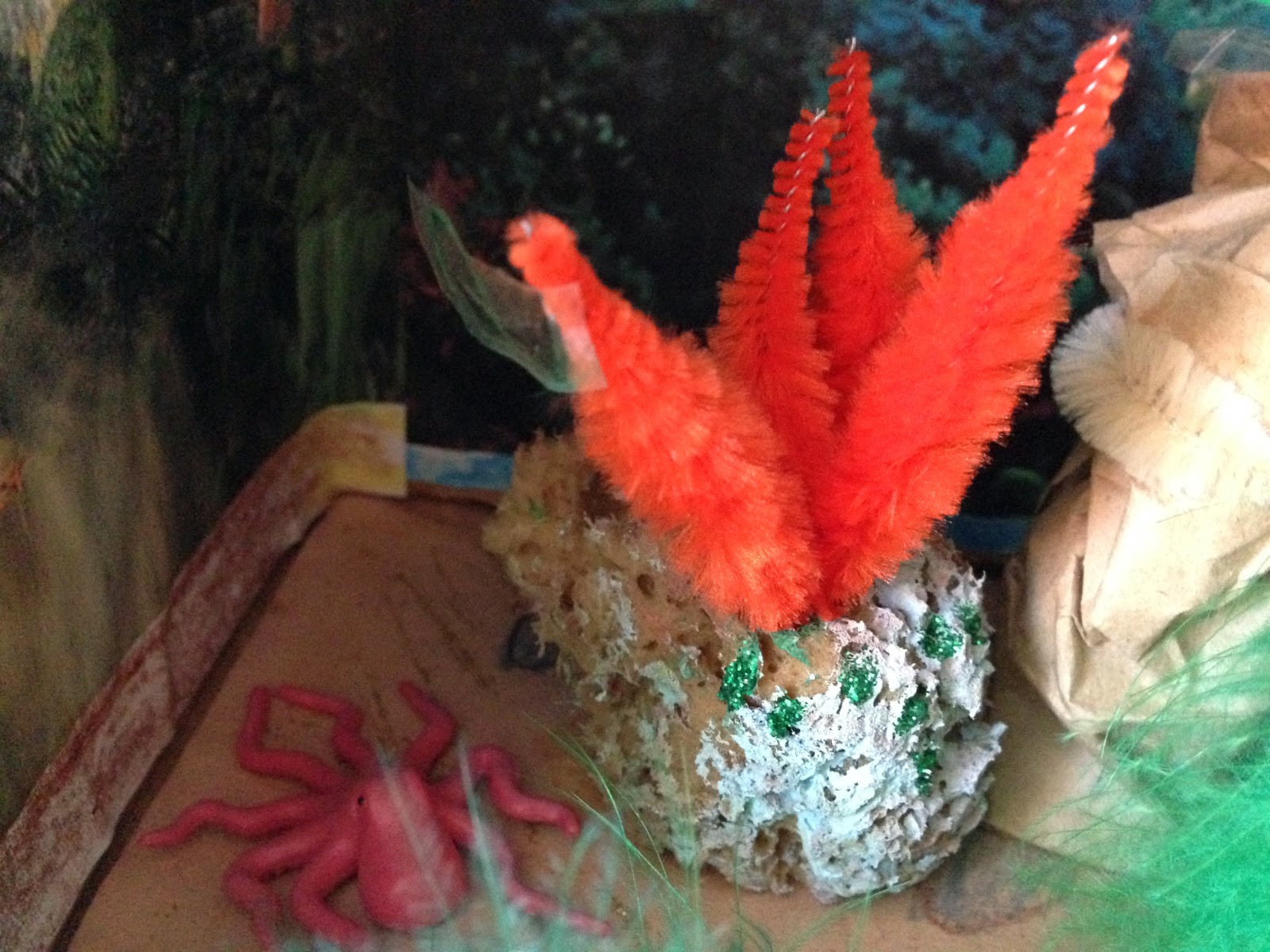 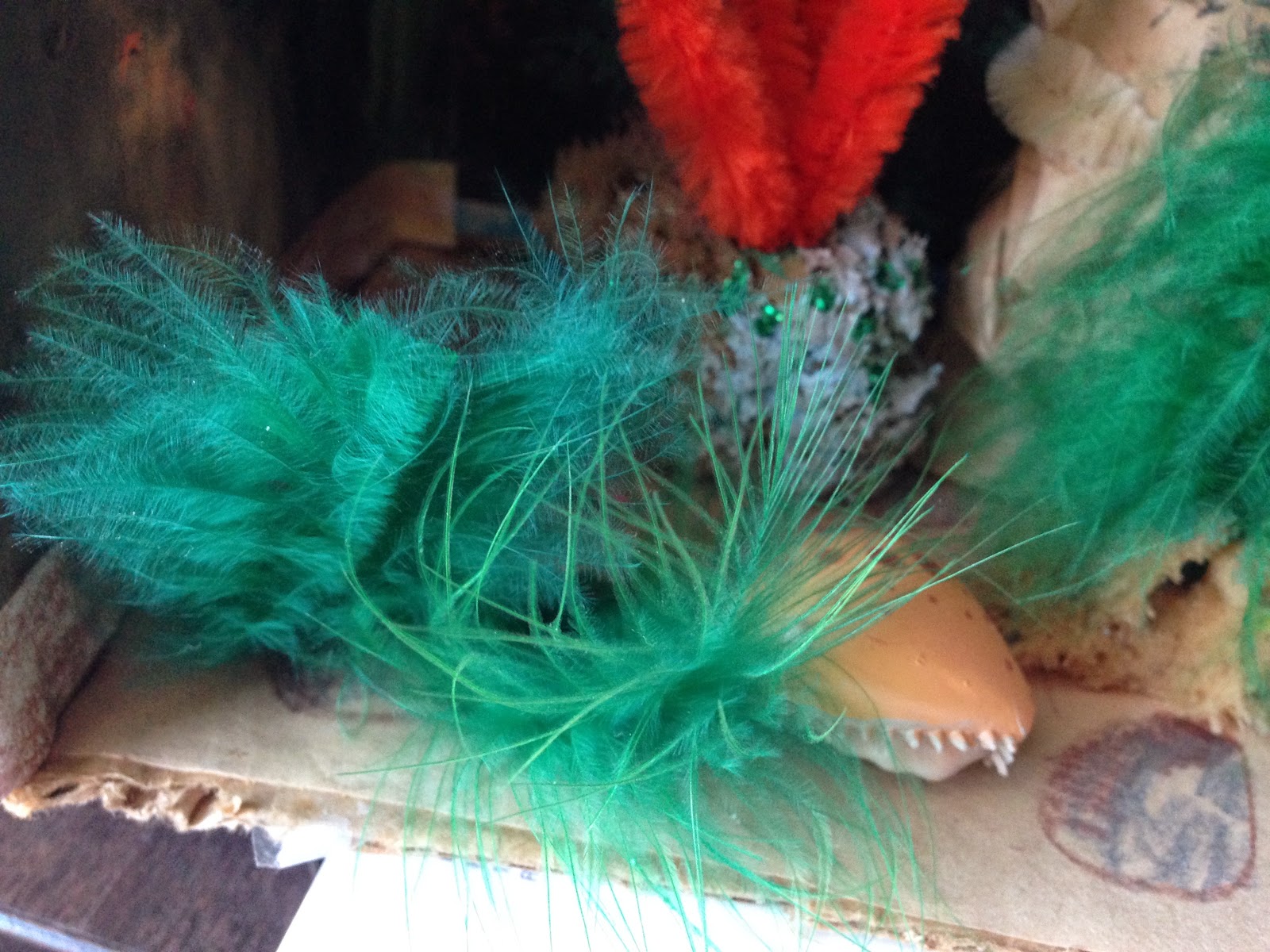 Here is how we nestled coral in the back corner and added feathers around it. 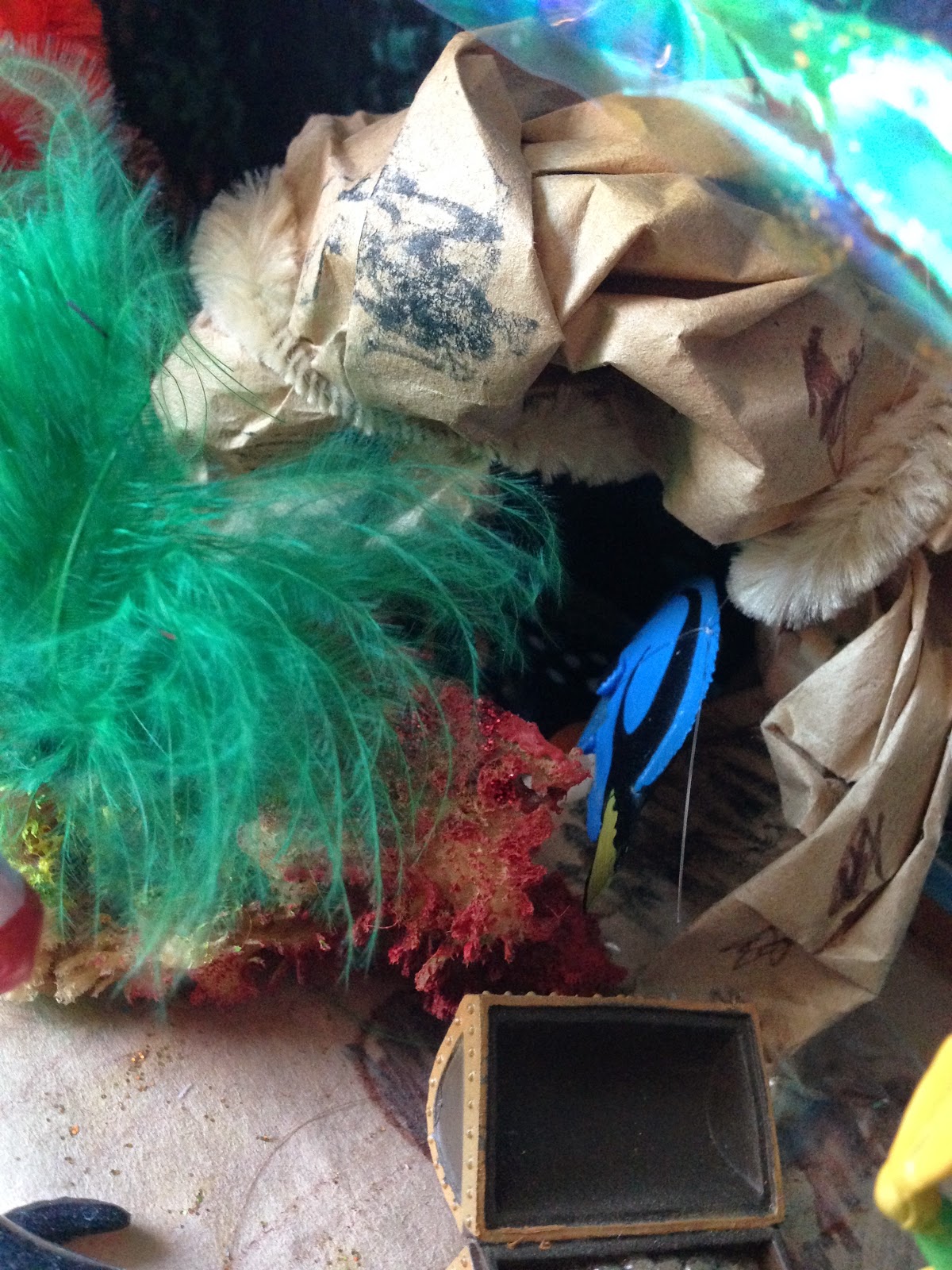 To make a rock cave, take a brown paper bag and twist it up, then curve it in an arc. Glue the bottom ends to the bottom of the box, and ht it with some paint or glitter glue for dimension. Pop a fish in there as if it was swimming into the abyss. 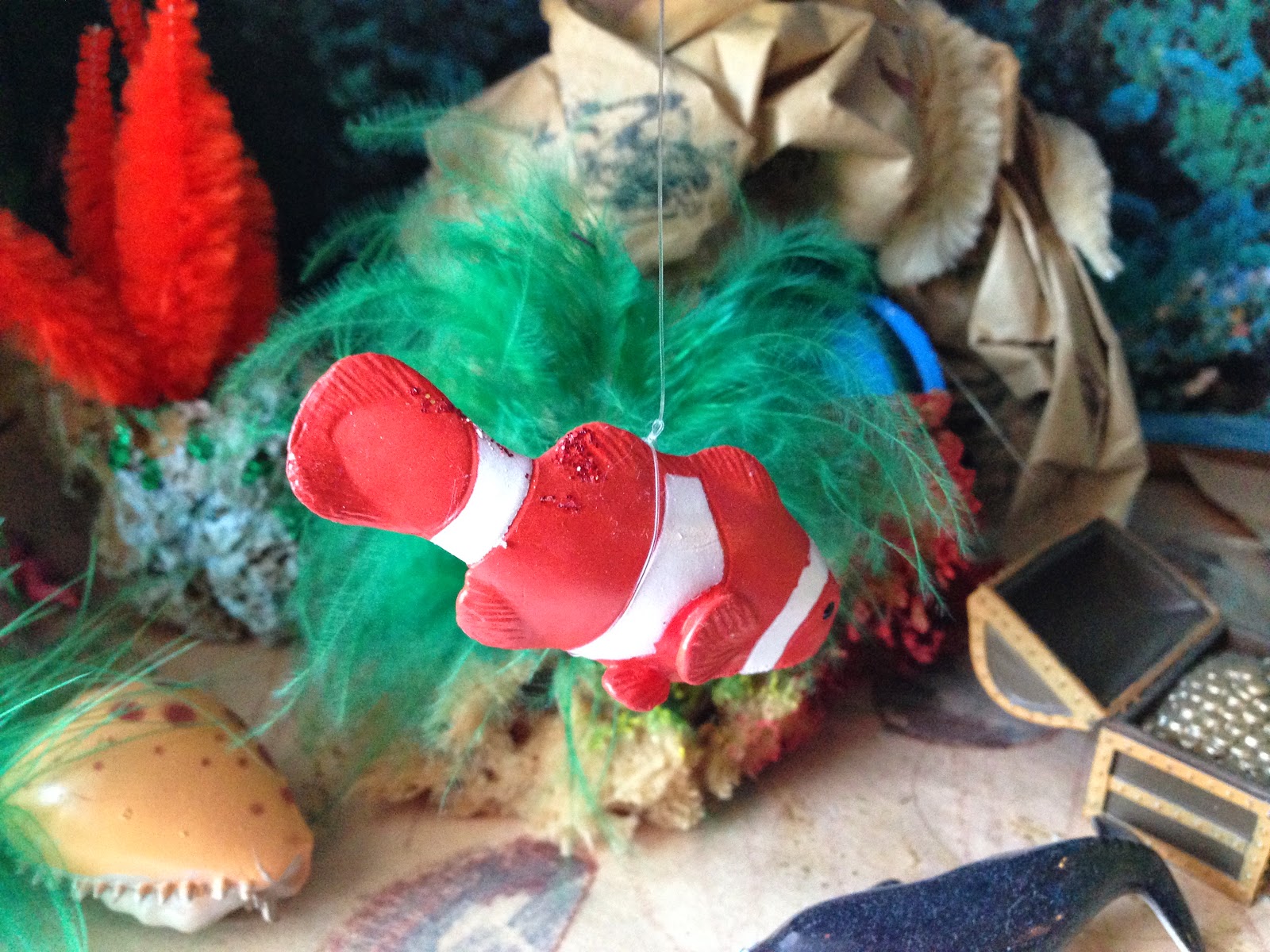 Finally using fishing line and poking holes in the top of the box with a needle, hang the swimming fish around there home. Thread the line through the hole in the top, anchor it with a knot and secure it with some tape. 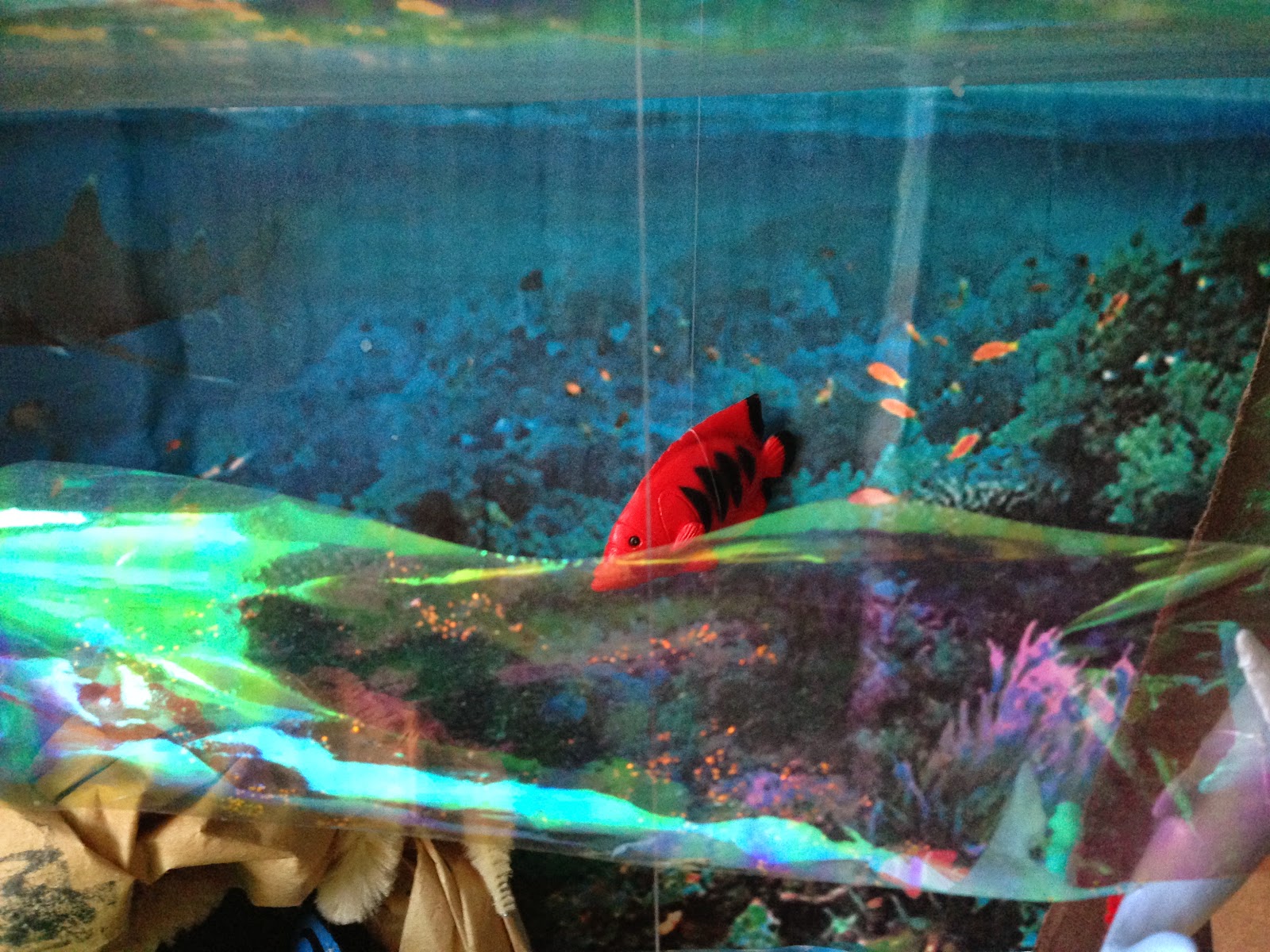 We cut wavy strips of iridescent cellophane to the length of the box. We added one mid way for dimension, gluing a folded tab on either side. We also taped a strip horizontally, matching the water line of the box. We secured it tightly on both ends and glued a plastic seal right on top of the "water". 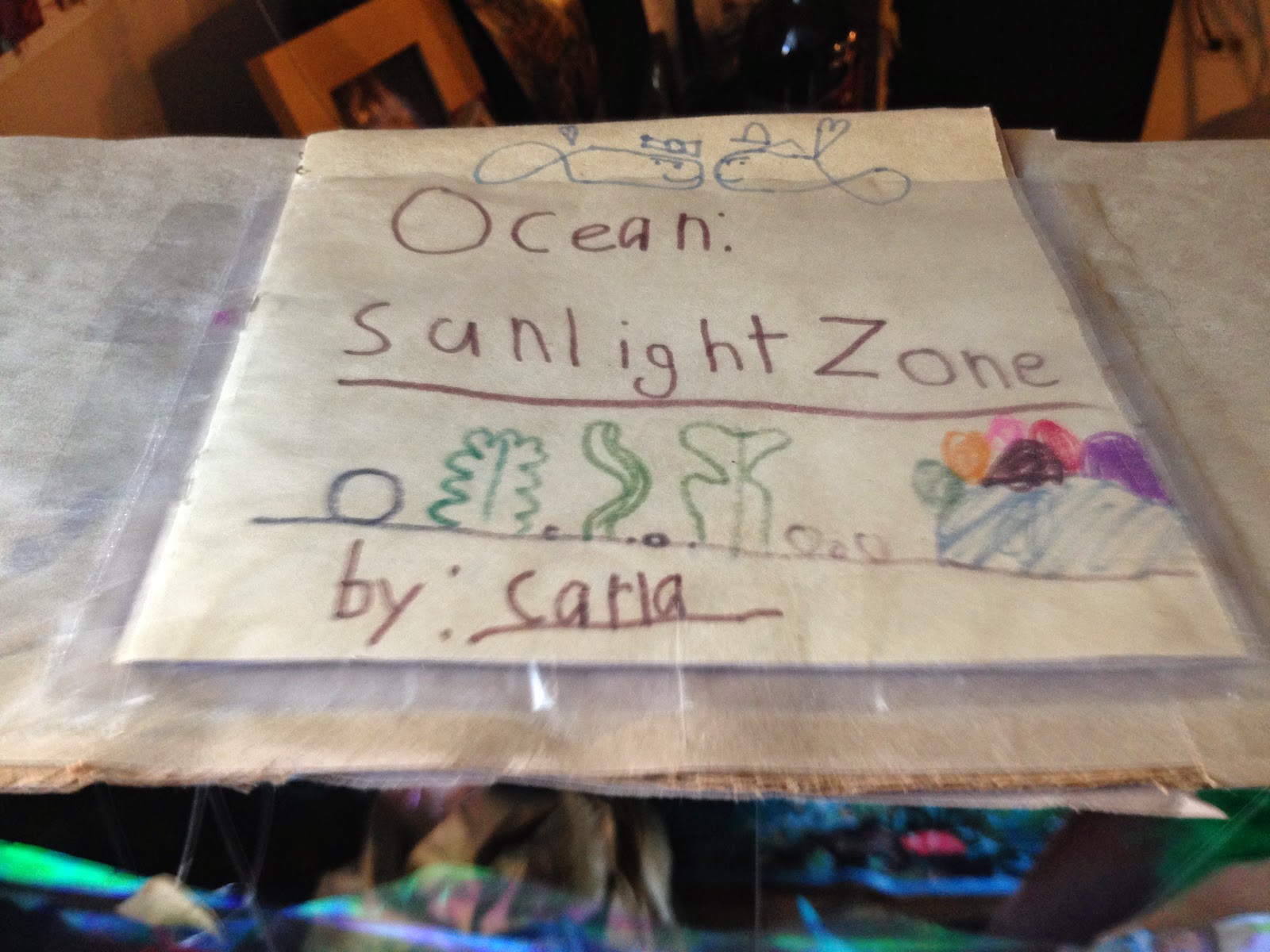 Finally, we glued some plain construction paper along the outer sides to make the outer box look nicer. We then taped down a sandwich bag on top to hold the "book" that accompanied the project. We cut the top off so it was a simple pocket that the teacher can pull out to read.

Yes, We got an A+ of course! And yes, I did help, but my daughter had a lot of the ideas and we worked on it together, but I made sure she did most of the work and art. I just helped with tying knots and dealing with fishing line-a tough thing for a second grader.