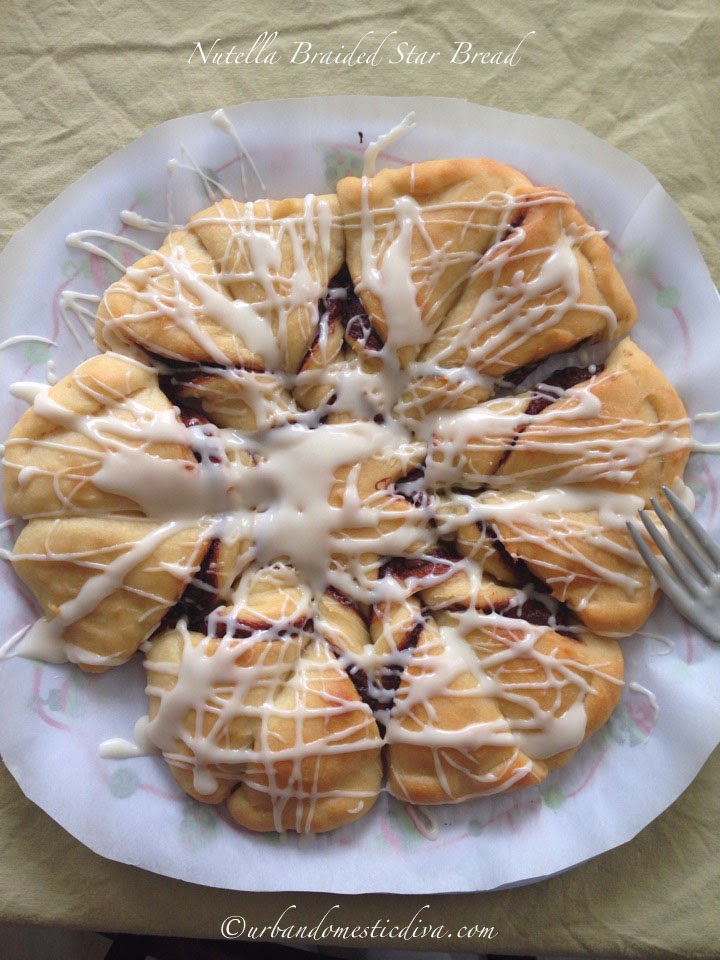 We finally got new neighbors in our hood and my husband and I were excited to "pay a welcome forward" so to speak. When we moved into our house, we were overwhelmed by how nice our neighbors were. Every day of our first week we were greeted with small gifts, bottles of wine and craft beer or baked goods. One of our neighbors included some of their favorite take out menus and dry cleaner information with cupcakes from a chic bakery.

We always thought it would be nice to do that for someone else some day, and we finally got the chance. I decided to bake a Nutella bread as a gift. We included a bottle of our favorite wine, and a list of our favorite neighborhood stores and restaurants to help the family get acquainted with the neighborhood.

There are plenty of Nutella breads floating around the Internet. I took this "star braid" from a blogger I found on Pinterest (goodhomedesign.com). I used a couple other recipes for the bread part, because I wanted a richer, sweeter bread. So I kind of made it my own, and made them so I could make two smaller loaves versus one giant one. That way, my family could enjoy one for breakfast the next day.

Now you go do something neighborly, too! It makes you feel really nice to do something kind and welcoming for others, and it's great making new friends.

In a small saucepan, gently heat the milk, water and butter until the butter is half melted. Take off the heat, swirl the pan, until the rest of the butter is melted. Cool down slightly, and add the yeast. Let the yeast sit in the liquid for 10-15 minutes, or until it begins to foam up. 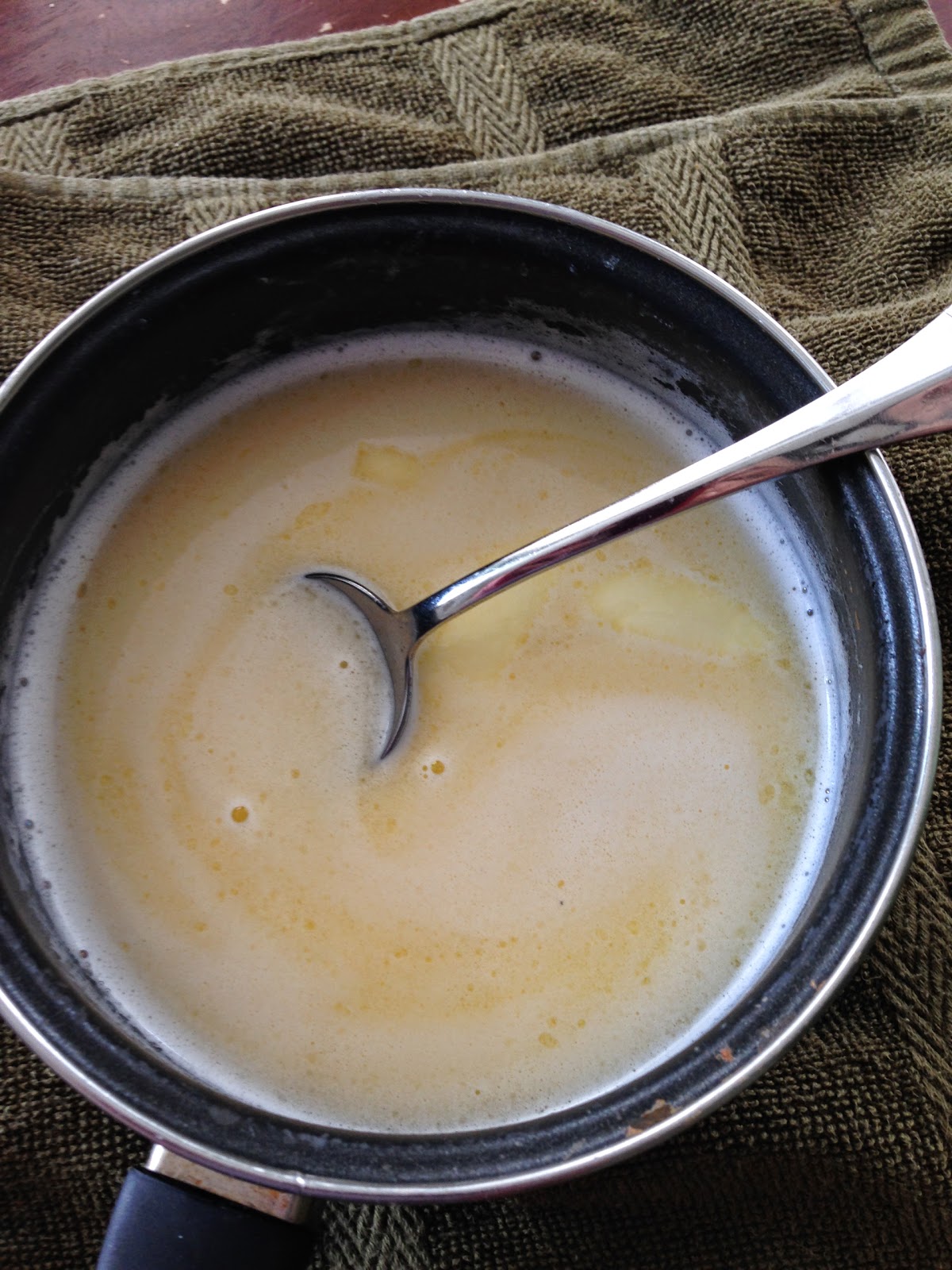 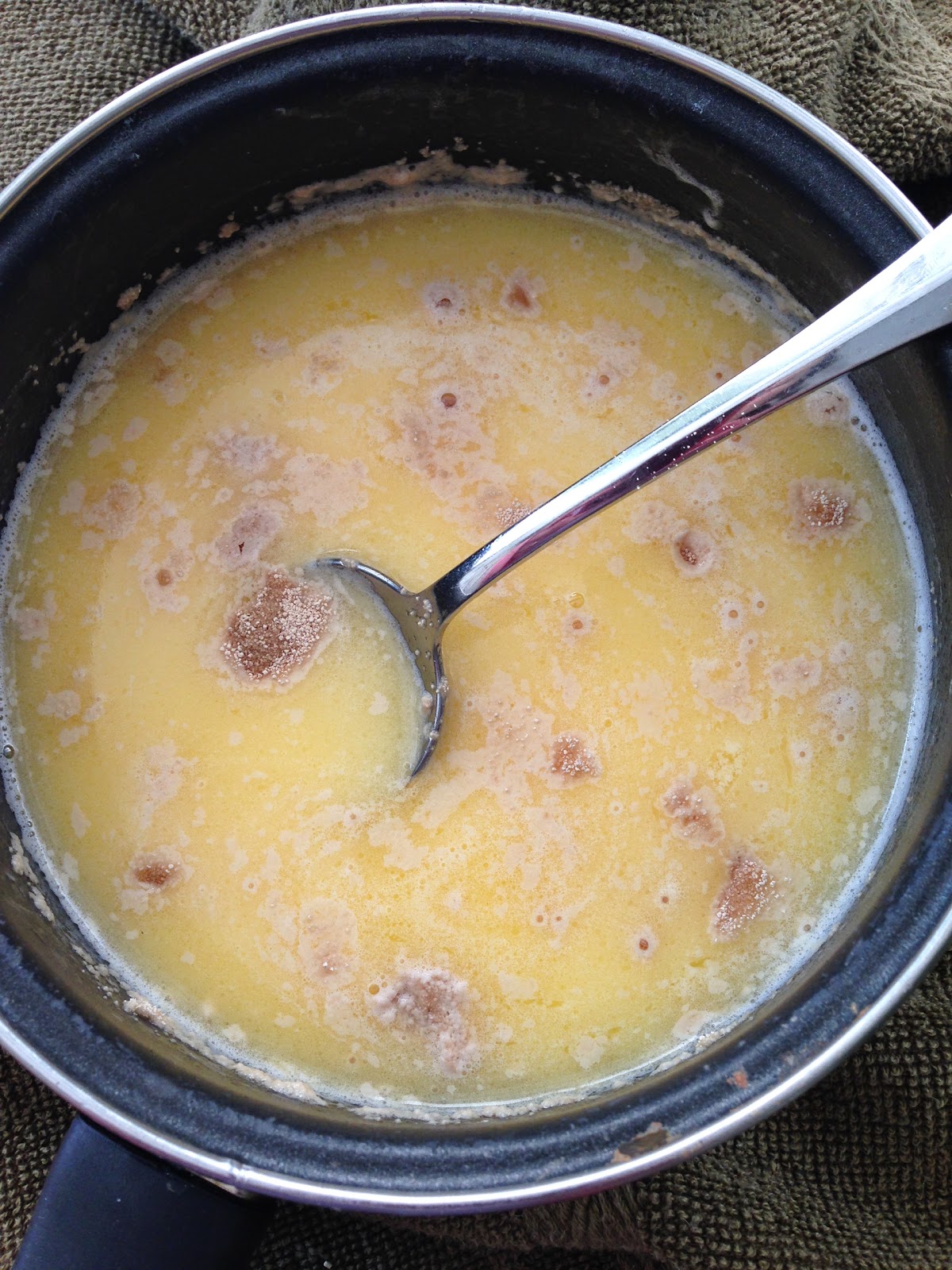 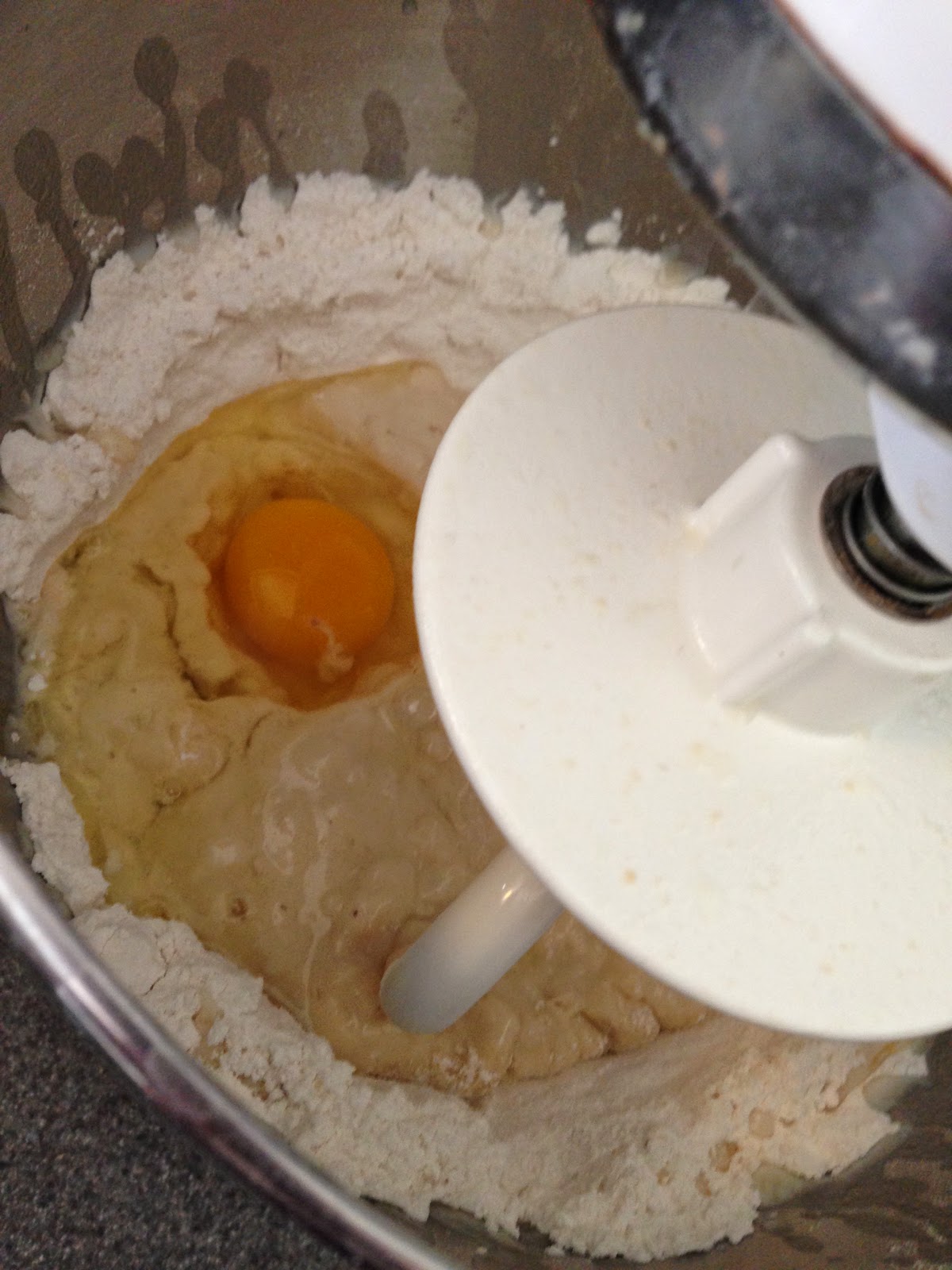 Mix the dry ingredients with a kneading hook on a stand mixer. Add in the liquid ingredients and mix part way. Add the egg, and finish mixing until dough forms and all the flour in incorporated. Spray a large bowl with nonstick cooking spray, and plop the dough in there. Cover with a lint-free towel and store in a dark, dry place for a few hours-or until the dough has doubled in size. 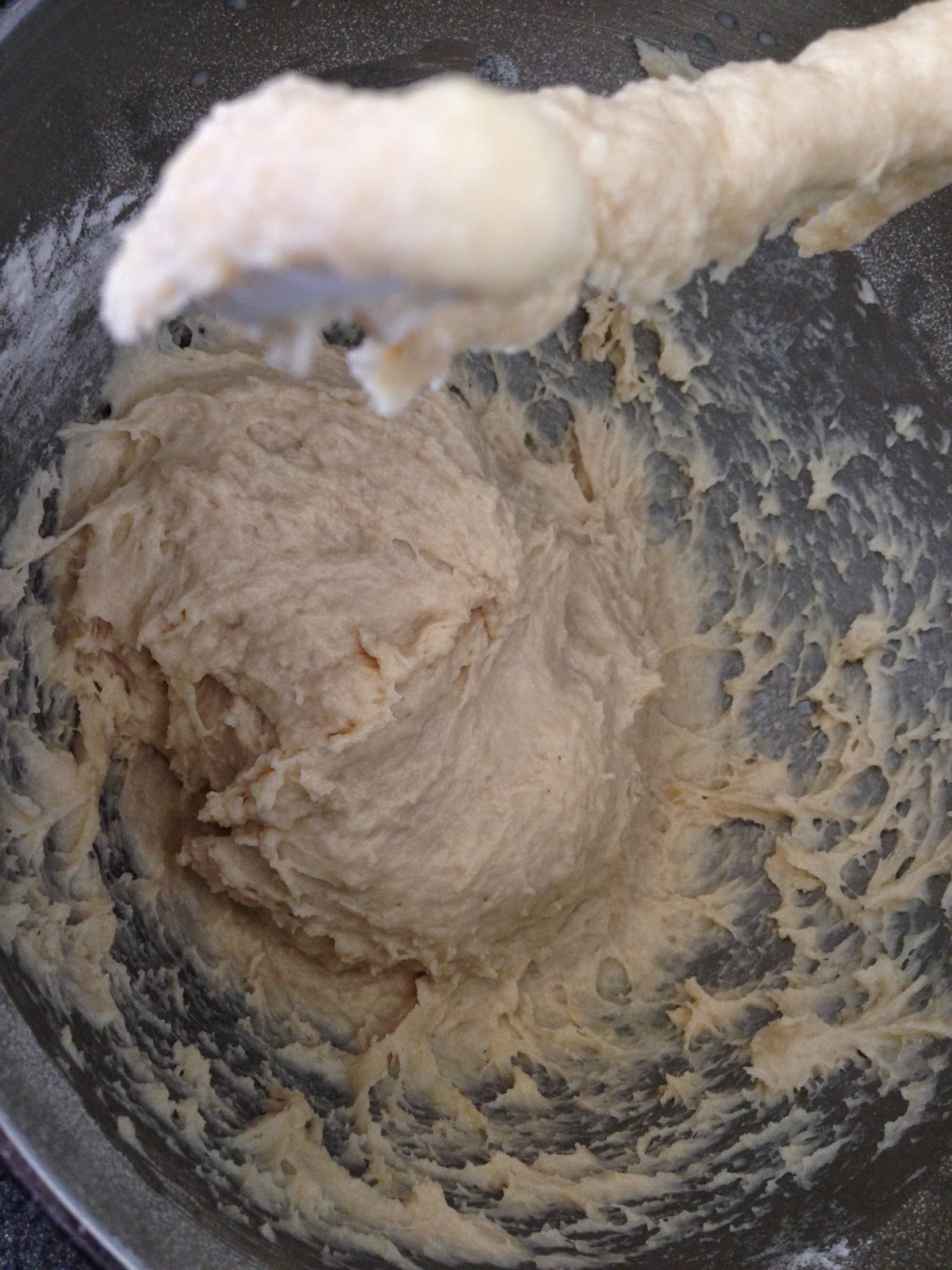 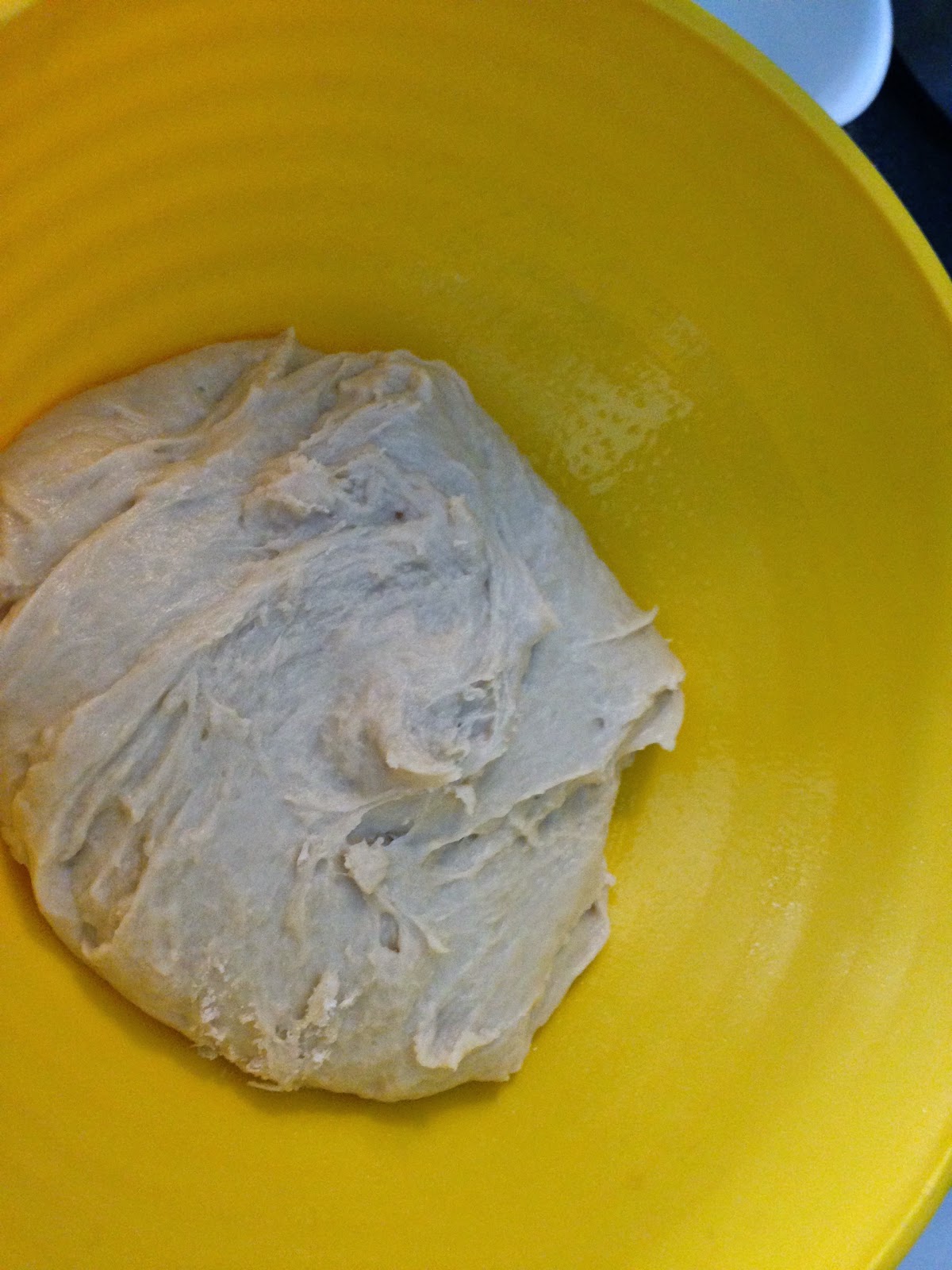 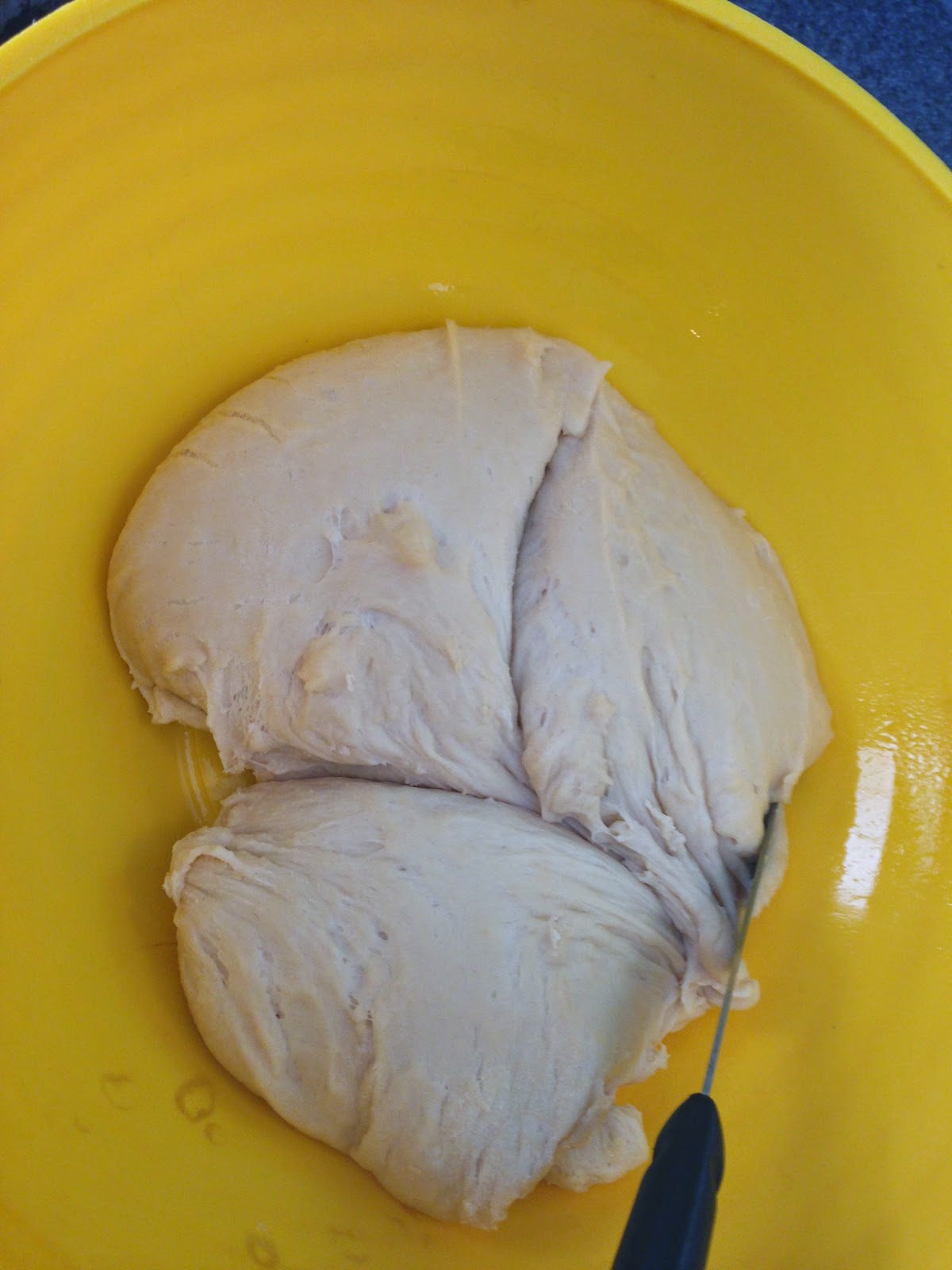 With a sharp knife, cut the dough into 4 equal parts to make 2 medium sized loaves. 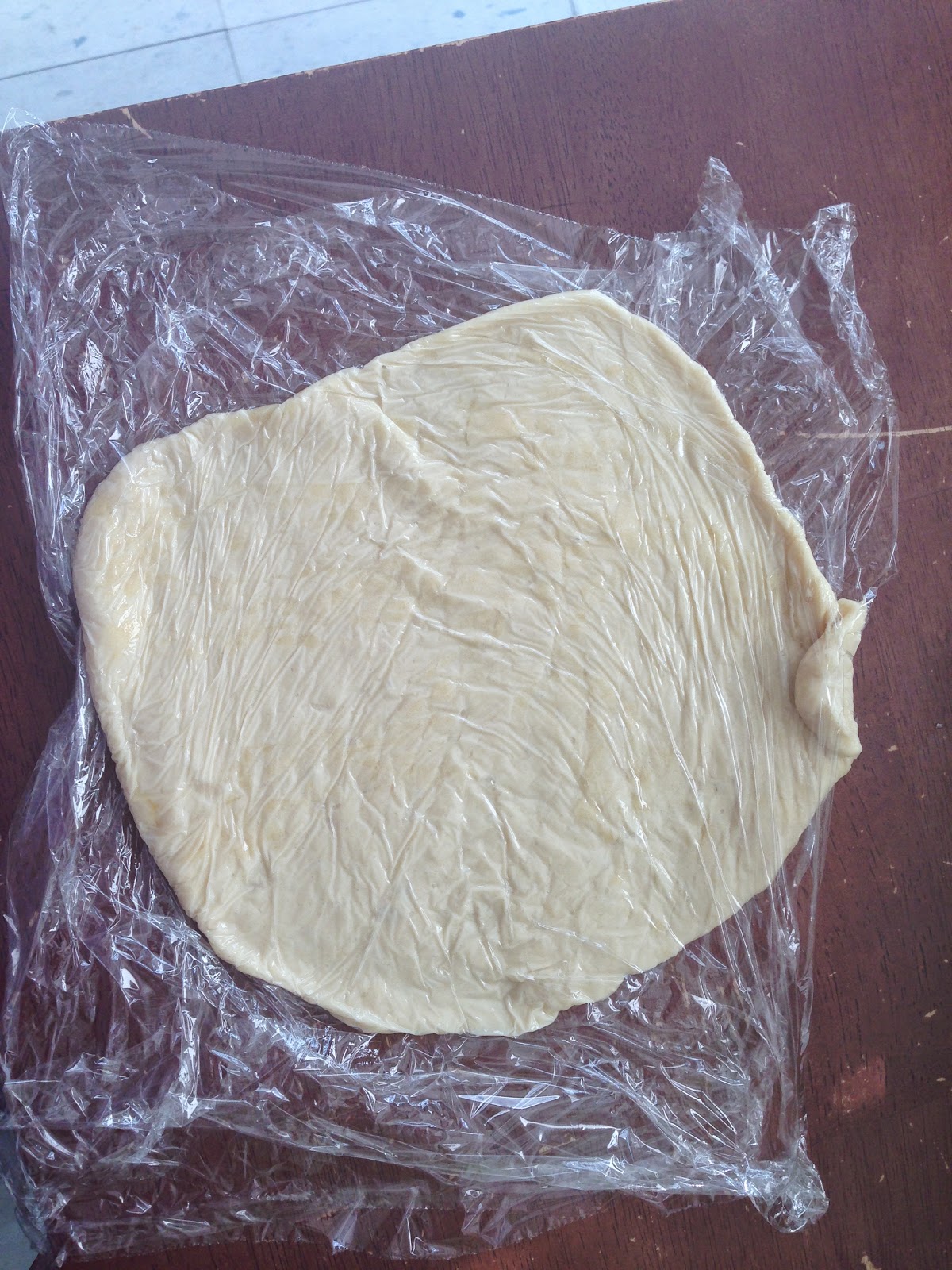 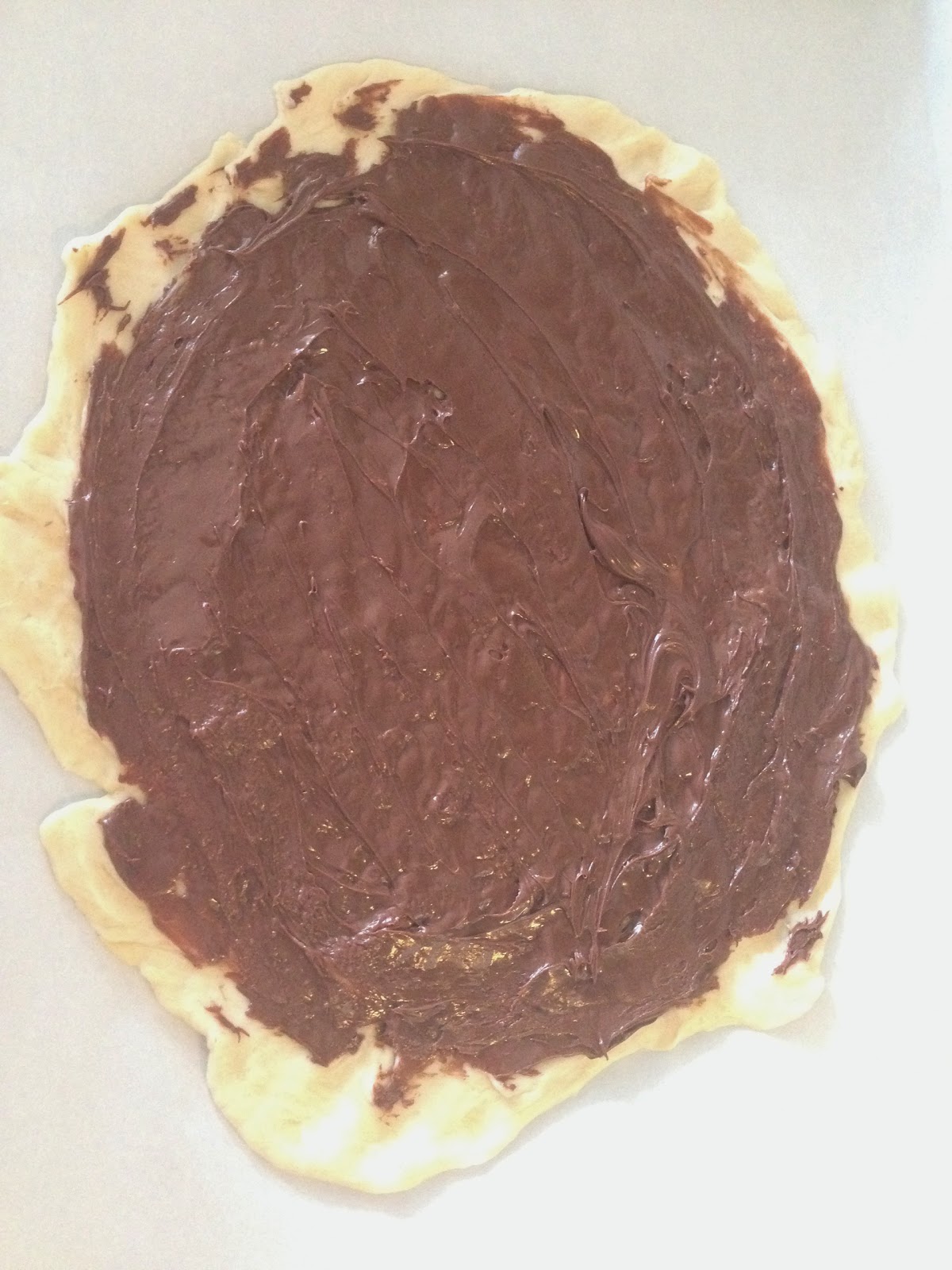 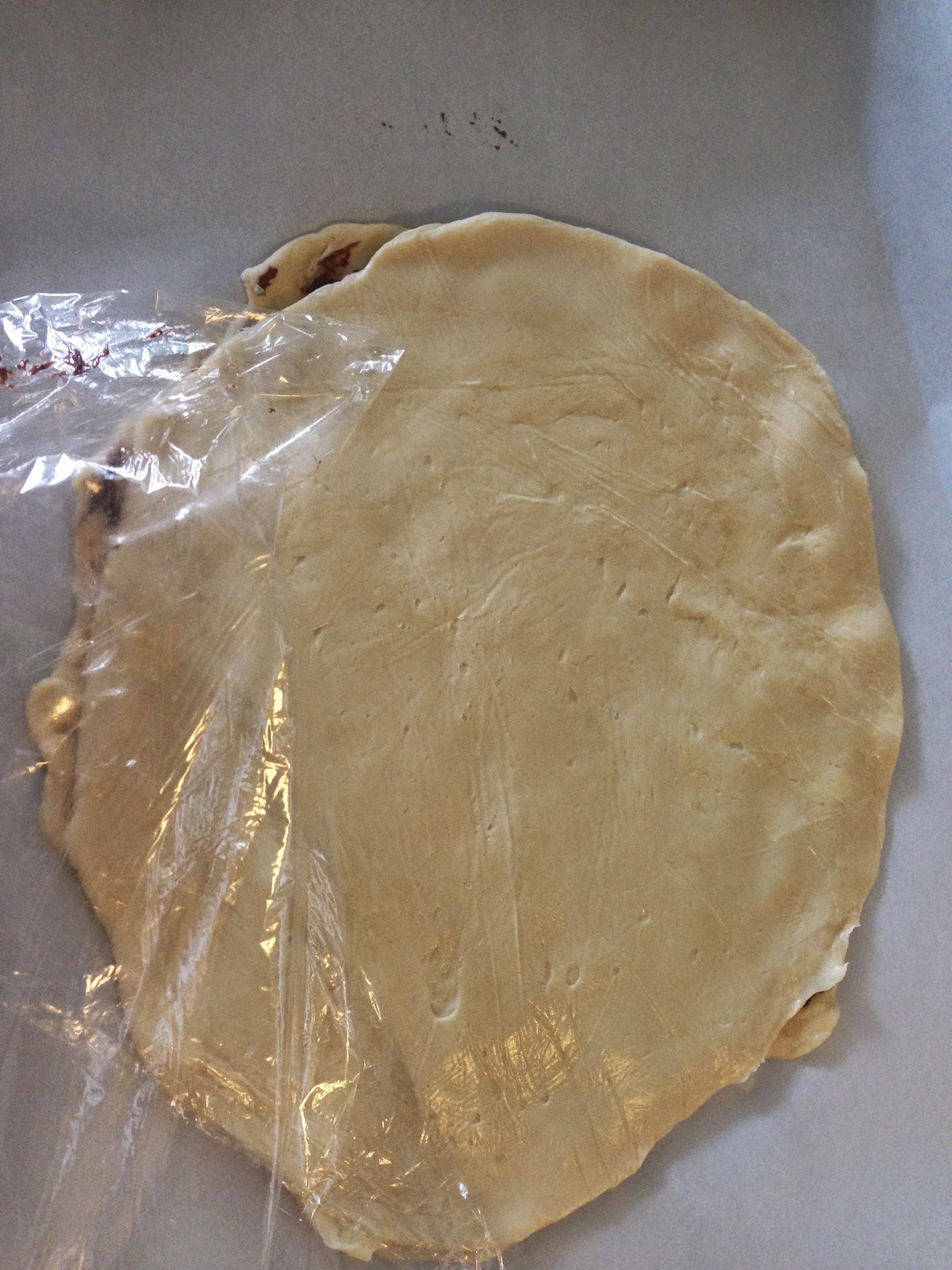 Shape the first piece of dough into a circle on some plastic wrap. Lay another piece of plastic wrap on top.
Roll out a circle between the plastic wrap. Peel top off and flip over the dough, releasing it from the bottom as it falls onto a parchment lined baking sheet. Gently spread 1/2 cup Nutella on top, stopping just short of 1/2 inch from the edges. 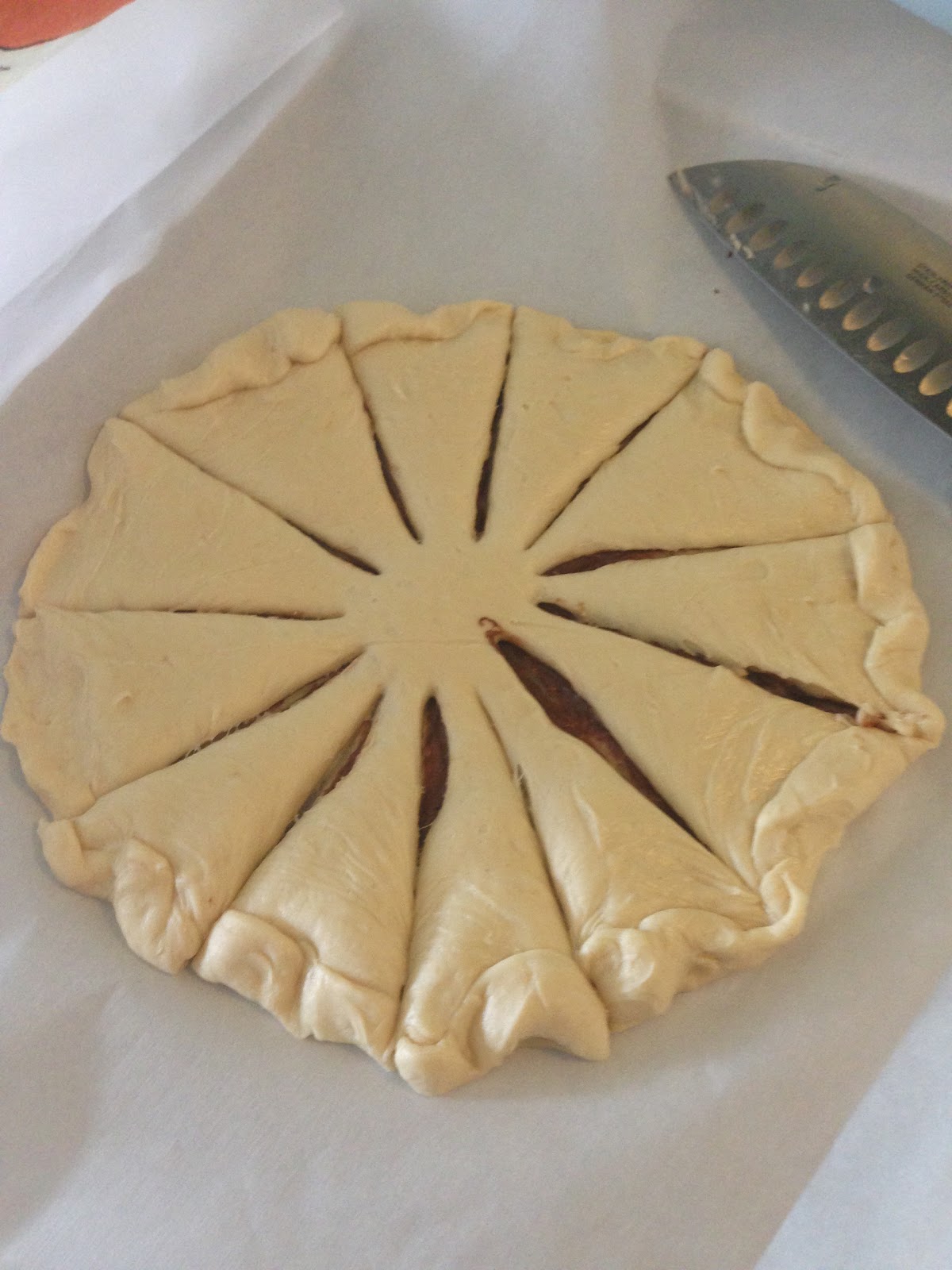 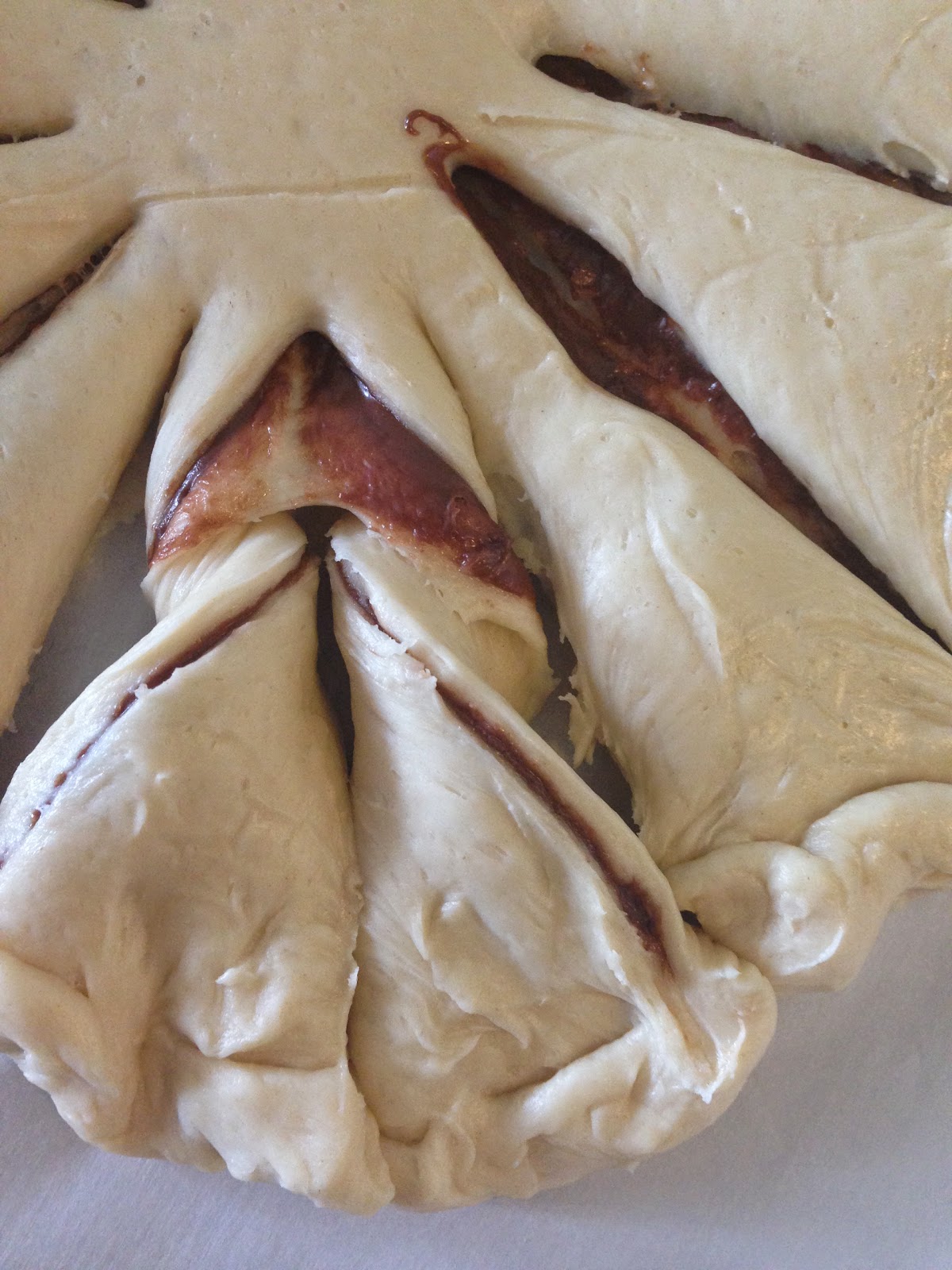 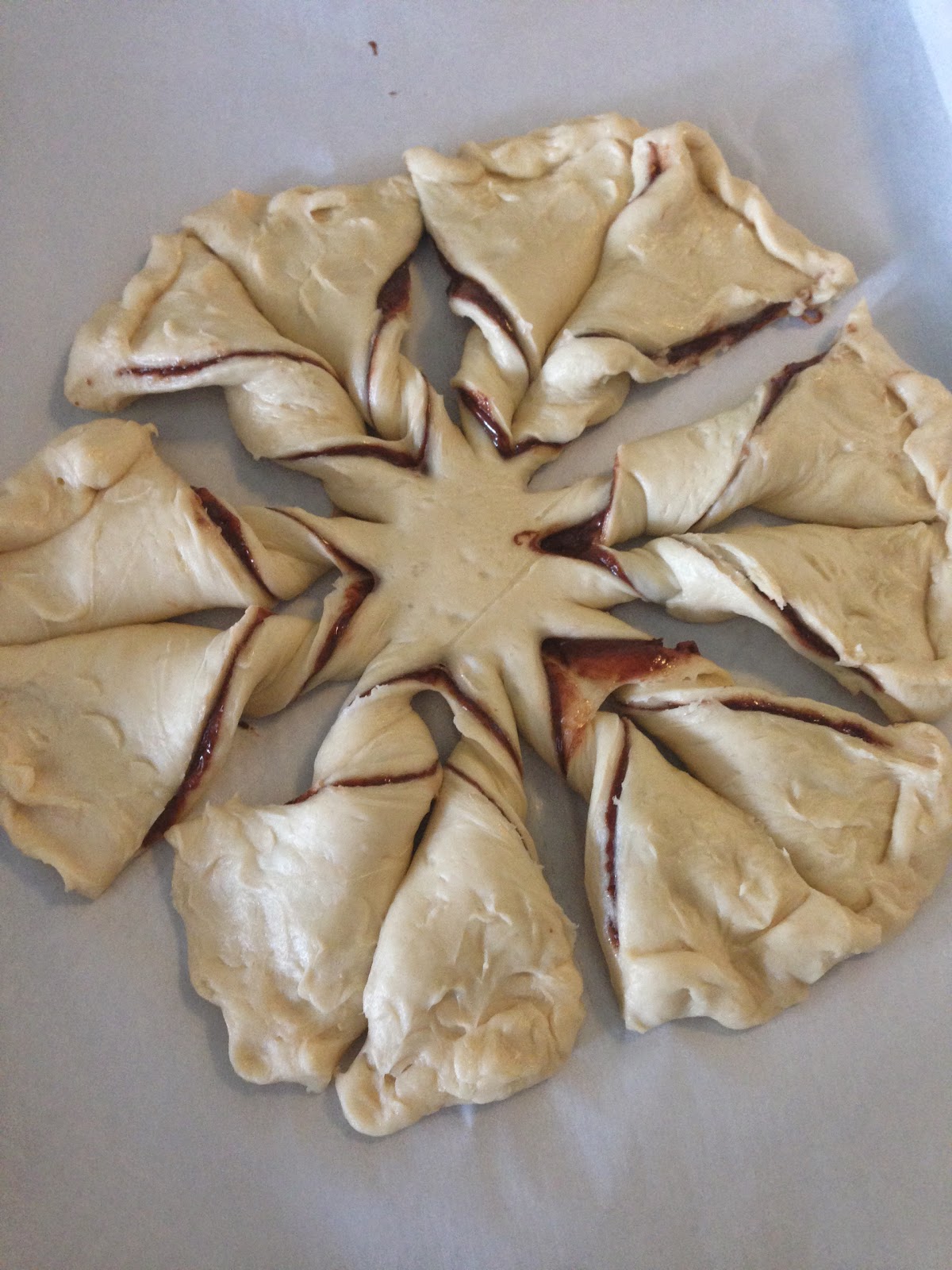 Do the same with the second piece, but plop the dough from the plastic wrap onto the top of the Nutella covered dough. Move it so it lines up the best you can. Crimp and fold the edges over. Cut slices, like a pie, but starting an inch or so from the center. Cut an even amount of pieces, so you have "pairings" of slices.
Take one of a pair, and turn it outward from the center twice, then lay it flat. Take it's pair, and turn that around from the center out, twice, then lay it flat next to it's pair. This will create the braid look. Continue until all the slices have been twisted and paired together. Do it again with the second loaf. Cover with a lint free towel and let sit for 20 minutes or so while you preheat the oven to 375˚ 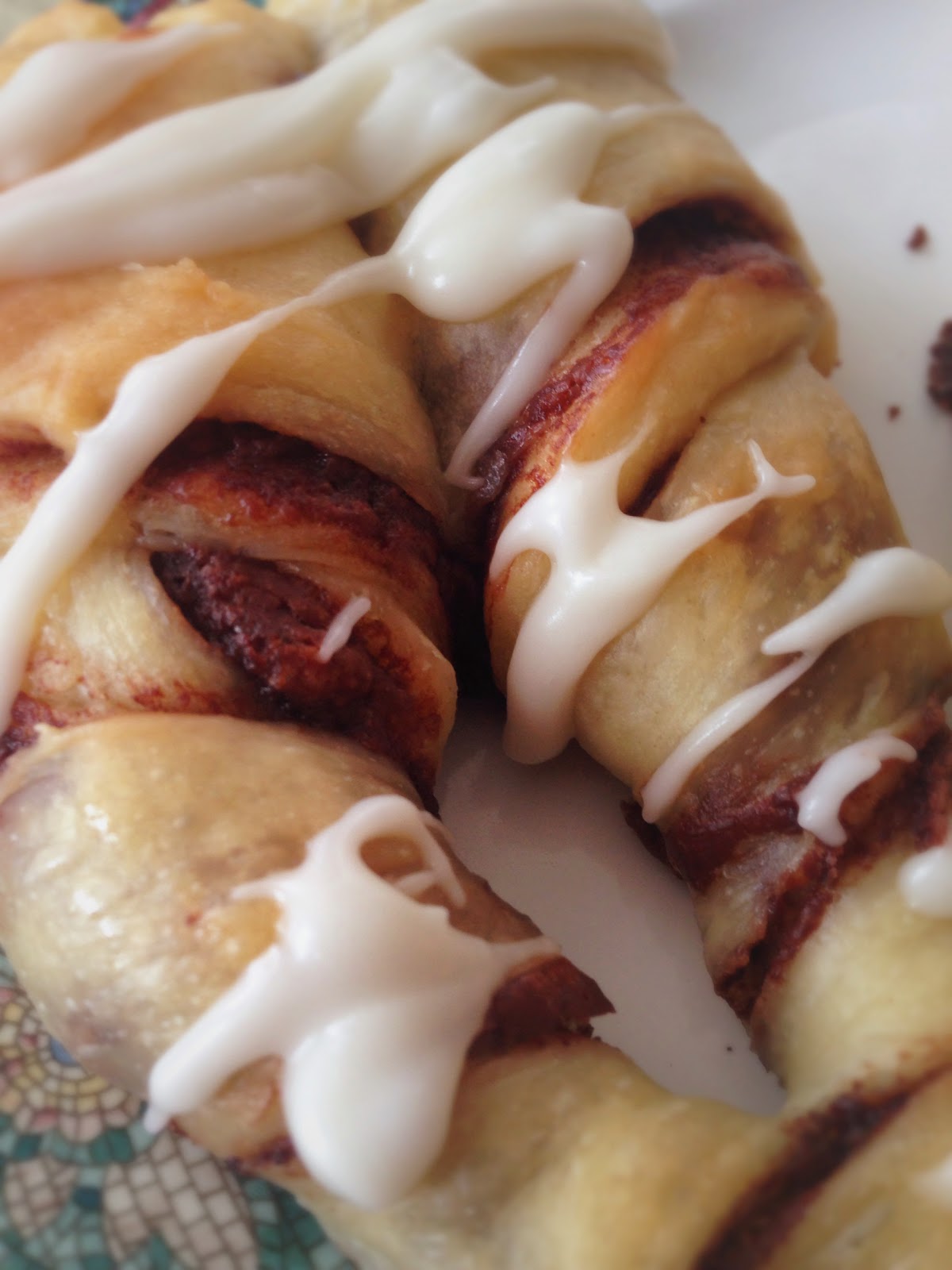 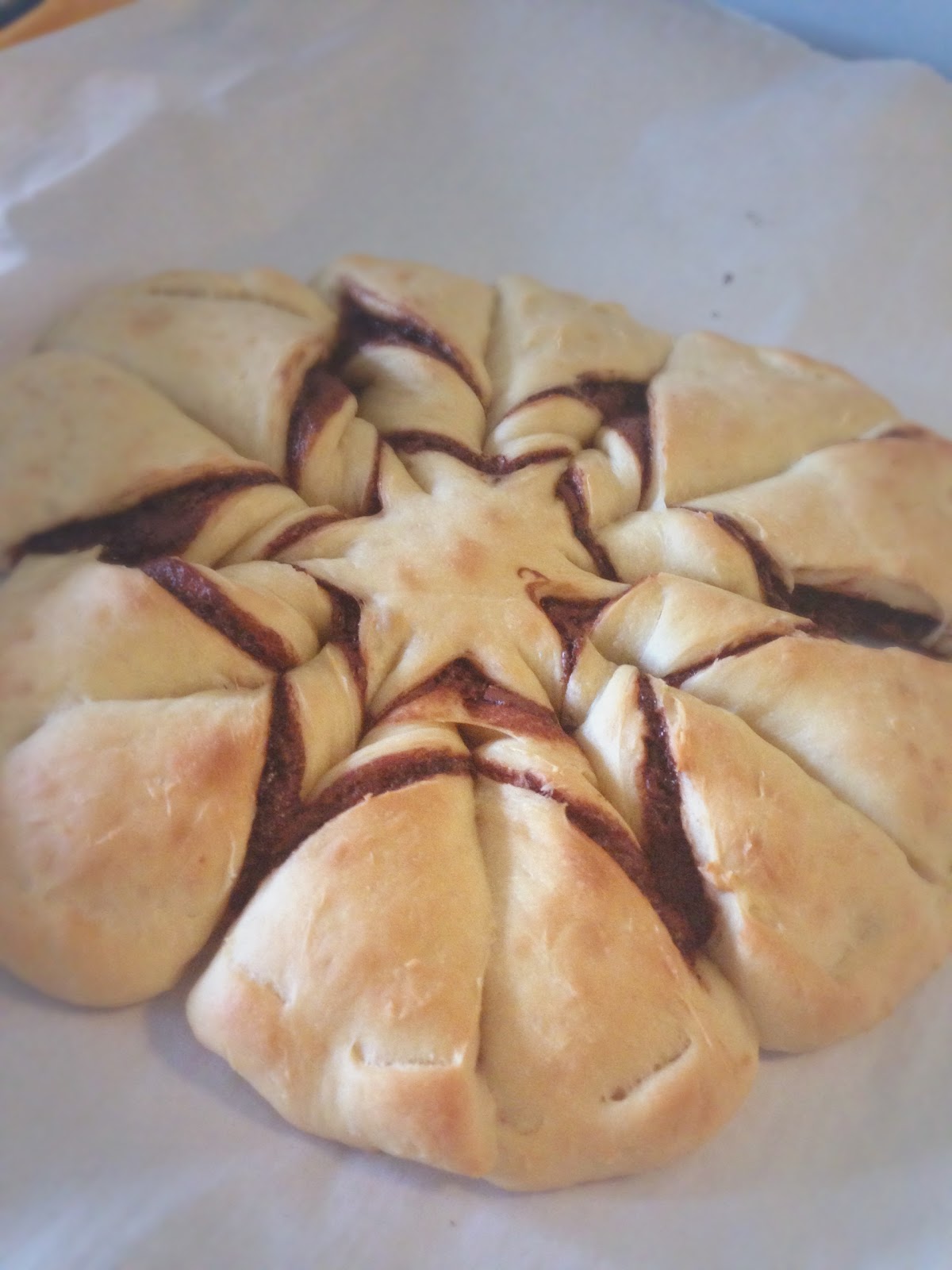 Bake the breads for about 30-40 minutes, or until lightly golden on top and puffy. Let cool on the sheets. Once cooled, mix the glaze ingredients in a small bowl until drizzling consistency. Drizzle over the bread using fork tines. Store covered for a couple days, but it will be devoured in SECONDS. 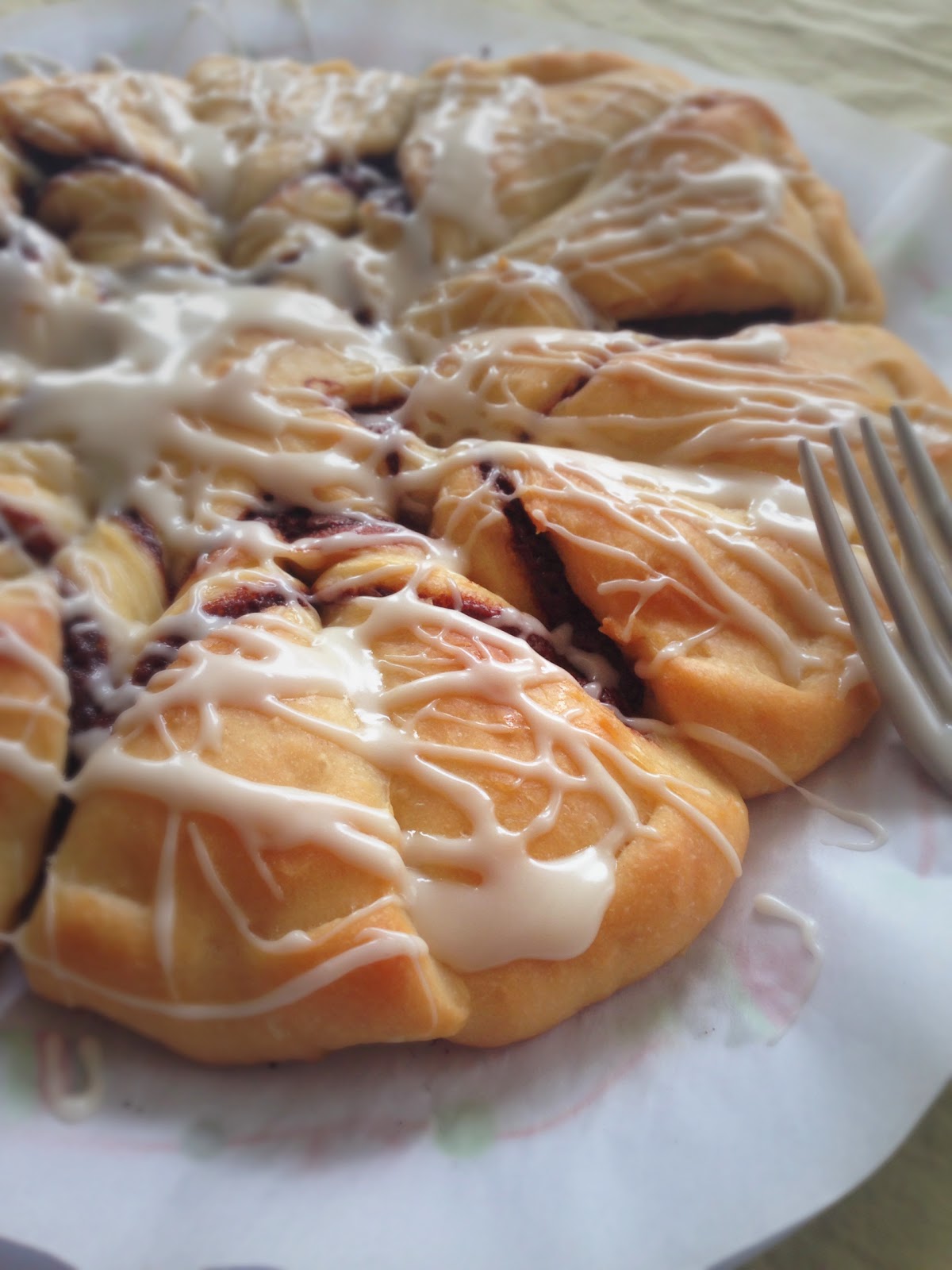