COOKING: The difference between convection baking and normal baking 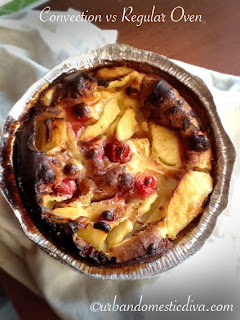 I have an oven that I would gladly trade for a fancy twin-oven stainless steel masterpiece (Some day, it's gonna happen...some day). But my humble oven does have a couple fancy settings on it that I use from time to time. Around Thanksgiving, when I have the oven full of a turkey and some sides, I use the convection roasting setting. It helps to brown my giant turkey in a packed-to-the-gills oven.

But the other morning, I decided to experiment with the convection baking setting. The idea behind convection ovens is about moving heat around the oven by the use of a fan in the back. I have found that the hot air goes around your pan, browning things quickly on the outer edges, but leaving the middle undercooked. Regular baking involves just heat coming from a main source-either top or bottom of your oven, and just stays put. If anything, hot air rises, so the air tends to float to the top. That's why when you want to brown a top, you put the item on the top rack. But generally speaking, regular baking creates uneven cooking, and convection cooking creates even cooking and browning. 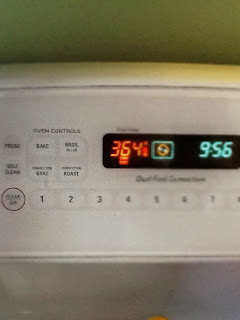 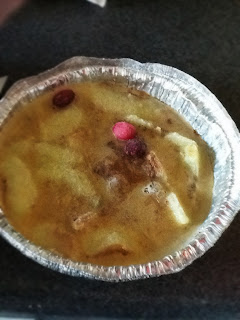 So, I bought a frozen apple pancake for breakfast the other day. The pancake was frozen solid, and we had slept in. When I read the directions, it recommended that it defrosts for at least 15 minutes, or in the fridge overnight. I had a hungry crew on my hands, and was dismayed to realize that now, the baking of this yummy was going to take twice as long. To try and cut down on time, I gave convection baking a try.

The result is above. Some of the edges did get a little too brown. But all said and done, it only took 5 more minutes of cooking time (frozen as it was) on convection baking. The middle was cooked through and it rose rather well. So convection baking came to the rescue! I think if the pan you are using has low sides, convection would be a great baking alternative. Pans with high sides, like casseroles, would be difficult to use convection.

So if you need some emergency fast baking on something frozen, convection seems to be a good lifesaver!