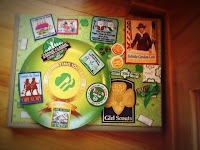 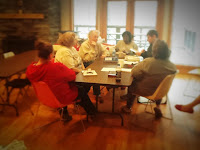 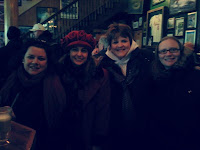 Girl Scouts is often thought of as an organization known for it's delectable cookies as well as it's reward system of badges for young girls as they accomplish various skills. These skills have been historically "domestic" in flavor, as well as outdoorsy. As the organization has been trying to stay relevant to today's girls, the badges have also changed to become what are called "journeys" versus one of badge work. They have also tried to include activities that are more 21st century like digital photography, business plans, green initiatives -just to name a few. But as badges and activities change, the core of scouts has not changed. That is the sisterhood that is at it's heart and soul.

I remember as a child really wanting to be a Girl Scout. My "off-the-boat" Italian parents did not understand the whole scouting thing. In fact, I think they were weirded out by it. I had a colleague once tease that it was a "quasi-para-military organization " Maybe my parents were uncomfortable by the uniforms, oaths and badges, being children of WWII and from Italy. I, however, was envious of scouts in my class. The pins and badges were so sparkly and colorful. The activities sounded so fun, and the scouts got to be out-of-uniform on the day of meetings. Those days they got to show off there cute caps and sashes to the rest of us lowly girls. I never got to join, but I swore if I had a daughter, she was going to join scouts as a Daisy.

And we did. And as we came to meetings, I gradually became inducted as a leader (HELLO? Look at my blog? Crafting, gardening, cooking on scrappy budgets? Hell yeah, I'm a scout leader!). I thought, I would stick with leading until my daughter wanted to move on to other things. Like most parents, scouting is cyclical. Many come into it when they were young and carry those learnings and experiences with them as they moved on through life. Then as many find themselves with daughters, they rejoin the organization for a time. For many it is quite fulfilling but activity ebbs and flows,

What I have come to discover, however, is that for other women scouting is a family-a sisterhood. The saying, "A sister to every scout" runs deep and true throughout the volunteer-led organization. I have met amazing women who are not only my coleaders but have become fast friends. We grow together as our scouts grow under our tutelage. But through these connections I have been introduced to a larger group of committed leaders and volunteers that have deepened my experience as a sister scout. This truth was galvanized at a recent leader-only event called "Sno-Joke", a weekend girlie trip held at one of the scouting camps in WI.

At this outing, the feelings of sisterhood and community was pervasive. As we all had a chance to stand up and introduce ourselves to the larger group, an elderly woman stood up and said, " My family keeps asking me when I'm going to stop scouting. They ask me, isn't it time after all these years? I told them, when I say good bye to family, I'll say goodbye to scouts." I was not only moved by this comment, but it was made real to me time and time again throughout that weekend among these wonderful women.

As I looked around at all of us enjoying a cozy weekend in a cabin in Wisconsin, I saw women sharing crafting ideas, sharing tips, exchanging recipes as well as gossip. They coordinated get well cards for fellow sick leaders as well as visits and meals to help these same women. A few retired beauticians cut and styled hair for free, shared baby pictures and swapped badges to troops in need of them. They complained about where the organization was going, pumped up volunteer work weekends for various camps and got others excited about upcoming events for the kids. The sense of community and love that these women had for each other and the feeling of responsibility they had for each other-to take care of each other-went much deeper than even the community at my own parish.

I don't know where the corporate entity is taking scouts. There seems to be a lot more emphasis on profit over community and more importance on the organization versus the girls they serve. There seems to be a forgetfulness that it is a volunteer driven organization. Without the countless women donating their time, inspiration, resources and energy to it, they would have no organization. Of these points, there was much complaining. I do feel some of this points need to be addressed, and I will in "Part 2" of my posts on scouting. (The organization isn't getting off that easy).

But as many of these changes are being debated, one thing I hope never changes. And that is the sisterhood that scouting creates.  A sisterhood that you, as a little girl, are welcomed into and always can be a part of well into old age, should you want to be a part of it. It's a place where others will care about you, and care for you should you need it. A place where you will be supported and inspired by others, and where you'll be reminded that there is a bigger world out there. And though you are a very important part of it, you have a responsibility to contribute to it, too. Juliette Gordon Lowe, the founder of Girl Scouts, said it best...

"Ours is a circle of friendships united by ideals."