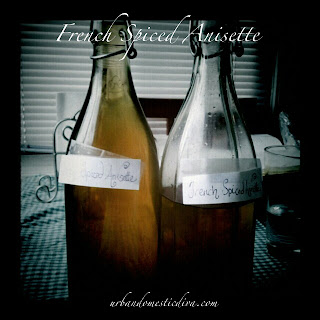 I posted late yesterday a recipe I played with from an out-of-print French book I found at the trusty library. Hidden in it's pages was a wonderful entry on how to make a homemade anisette. Anisette is a staple in my family. My Nonna would sneak big splashes of it every time she had coffee. She also used it liberally in her biscotti. A bottle of Sambuca is always offered during the fruit, nut and dessert course at an Italian table. It's as common as wine.

So this French version caught my eye. I also never thought to make it from scratch. But as in all things, that's how it was made originally. Harvesting the green anise seeds is what the original recipe recommends. I decided to switch out with dry (being that it's February). I also had a lesson on eau de vie, which is what French families use as a base. This is a traditional French fruit brandy, but any fruit based brandy would work-or even Grappa.

The French drink this neat or as an aperitif on ice with a little water to pair with cheese and olives. We decanted this last night and bottled it, and we were sipping it neat while watching Walking Dead. (Well, husband was watching it, I retired to some "me-time" and blog upkeep. Zombies eating people's faces off-with a wonderful anisette or not-does not appeal to me!) Needless to say, this was DELICIOUS.

I also plan on bringing some to my parent's house for dinner tonight. Let's see how the Italians like how the French make anisette.

1/2 vanilla bean, split in half lengthwise, exposing the seeds

1 quart "eau de vie" or other fruit brandy (such as apple or pear, or even grappa) 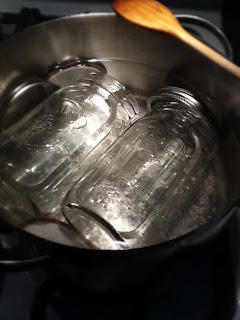 Sterilize a wide mouth mason jar and it's top and seal in hot boiling water for 5 minutes. Let drain on paper towels, using a spoon and tongs to take them out of the water carefully. Let cool down until able to be handled. 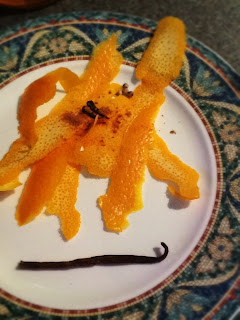 In a mortar and pestle, grind the anise seeds roughly, releasing the aroma and oils of the seeds. Pour them in the prepared jar. Add the other ingredients and pour the brandy into the jar, just under the top. Seal tightly. Label the jar and store in a cool, dry place out of direct sunlight. Let steep for 2-3 weeks. I prefer 3 weeks, because the longer steep time deepens the flavor. 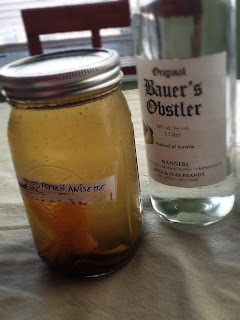 When ready, strain the liquor through a fine sieve lined with cheesecloth into a clean glass bowl. You may wish to do this twice if there are still a lot of particulates in the liquor. Cover with plastic wrap while you prep and cool down things in your next steps.

So meanwhile, heat up 4 cups of water to boiling. Dissolve 4 cups of sugar in the hot water. (This is a pretty basic simple syrup, and a good thing to remember as you make liquors and cocktails. Equal parts sugar and water is a good ratio.) Stir until dissolved, then take off the heat and cool it down. Don't get anxious. Hot liquid in the liquor will cause the alcohol to evaporate, and this is a grown up drink with a grown up punch. So take your time and cool things down to room temp.

Meanwhile, sterilize a bottle(s) that can hold about 2 quarts of liquid in the same manner you sterilized the jar in the beginning. When the simple syrup and the bottle has cooled down enough, its ready to combine everything.

Mix the syrup into the steeped liquor. Using a funnel, pour into final bottle and store with you other liquors. Be sure to label this lovely concoction. Store in a cool, dry place.