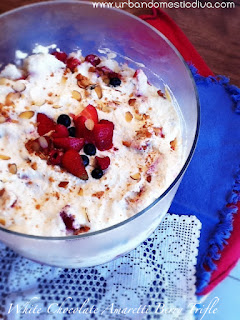 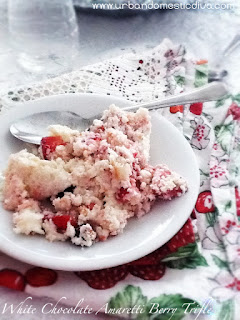 I was tasked with a cool, light dessert for my Mother's 4th of July picnic. I have always wanted to try a trifle of some sort. It's like sweet, creamy deliciousness meets "lasagna". It always looked very dramatic for serving to guests, yet easy in theory. So as my mother was asking me for a dessert, I was staring at my Gooseberry Patch calendar with a  giant "summer berry trifle" recipe as the feature for this month. Thinking "culinary karma" was at work, I told my Mother that was what I would make. But the Gooseberry recipe was a little too processed for me. I wanted more complex flavors infused throughout to compliment summer berries like almonds and kirsch. I also decided to use crumbled Amaretti cookies to kick up the flavors even more while adding texture. So on July 3rd, I got down to business.

In my recipe, I made a white box cake. (Betty Crocker, to be exact. All the reviews online say that it is the best box cake for white and vanilla cake, fyi) Because of how moist this cake is, it got a little mushy in the trifle. You can try pound cake, angel food cake, or even lady fingers. If using lady fingers, I might double your melted jam/liquor mixture. Lady fingers need a good-yet-restrained soaking.

The women at the picnic said it was little too mushy but was still very good. The guys said it was lip-smacking good and wanted seconds. So go figure? I guess if you want more of a "bread pudding" consistency, go with a moister white cake. I may try something a little more absorbent and "structurally solid" next time around. Either way, this was a hit flavor wise and is now being requested by The Hubby for his birthday treat.

White Chocolate Amaretti Berry Trifle
Best if made the night before, refrigerate for at least 5 hours

1/2 cup sliced almonds, toasted
1 cup Amaretti cookies, crumbled in a ziploc bag with your hand or a rolling pin

Assembly is easy. It's the prepping of every layer that's time consuming. 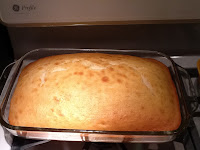 Bake your cake if not store-bought according to package directions, cut into rough thirds and chop into 2" squares. Set aside. 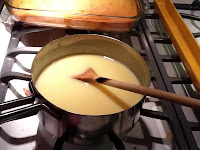 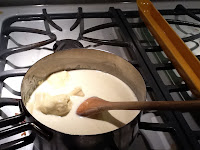 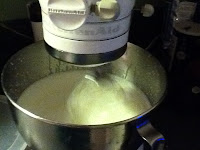 In a small saucepan heat the 1 cup whipping cream until hot. Add the white chocolate and whisk until melted and smooth. Take off heat and let cool down until room temperature. (if this is too warm your whipped cream will separate, so take your time to cool it down.) In a chilled mixing bowl, whip the 2 1/2 cups whipping cream until soft peaks form with the 1/2 tsp. almond extract. Carefully fold in your white chocolate mixture until well combined. Set aside in the fridge until you need it. 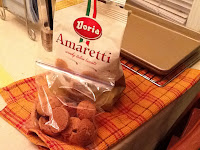 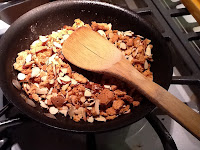 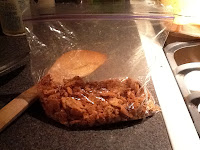 Toast the almond slices in a pan until golden. Take off heat and toss in the crumbled Amaretti cookies. Set aside. 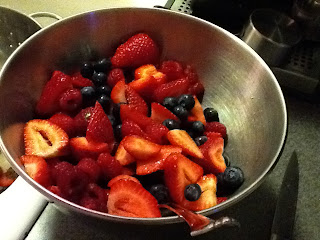 In a large bowl, toss the berries together. Set aside. 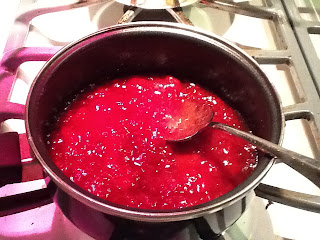 In a small saucepan, melt the preserves over medium heat with the rest of the almond extract and the liquor. Heat until melted, bubbling and able to be drizzled. Set aside. 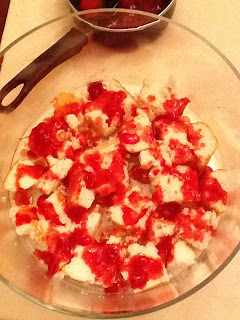 In a clear glass bowl or trifle dish, layer 1/3 of your cake squares along the bottom. It can be loose.
Drizzle 1/3 of the melted preserves over the cake. 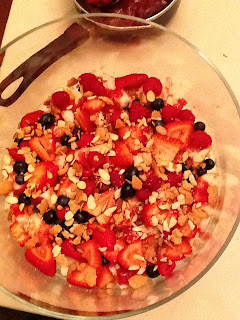 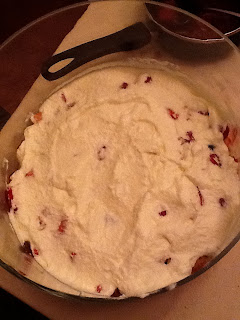 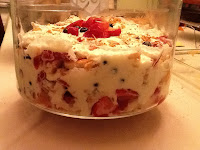 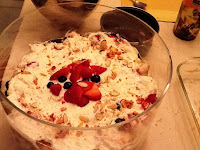 Repeat until you have 3 layers. Save a handful of almond crumble and berries for garnishing the top.
Store chilled for at least 5 hours-or over night.


Using a large serving spoon, serve it up with some chilled coffee!