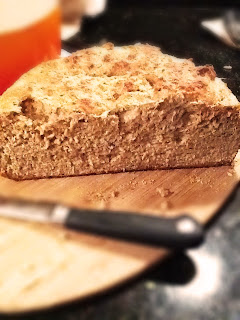 Recently I posted a very hearty "No Knead in No Time" artisan bread. Since then I have been playing with the recipe, adding various mix ins and grains. I wanted to try a Bob's Red Mill Grain mix to add some good grain options as a base without having to buy bags and bags of various grains to keep in the pantry. I love millet and flax, but if not used up quickly, will get stale. Then a cranky husband cleaning out the pantry mumbling as he is throwing away "money" ensues and it's just not a good scene. So you can say Bob's Red Mill saves marriages? No, maybe not that far. But close.

After all, nothing makes a man happier than warm, home made,  hearty bread from their wives. It's a June Cleaver thing...I think.

So, back to Bob's Red Mill 10 Grain bread mix... it makes amazing bread. This variation on the process is pitch perfect. It is my best one yet, and I think it was the abundance of olive oil with the pine nuts I mixed in. The pine nuts and oil a mellow, nutty flavor with a really moist crumb and chewy crust. I brought it to my Wine and Dinner Club and the wives packed up the leftovers before I could sneak it back in my bag to bring home for later! People fighting over your food means you did something right! 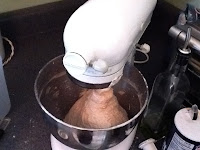 In another bowl, mix Bob's 10 grain mix, the whole wheat flour, the oats and the pine nuts. With a kneading hook attachment on the mixer, mix in the flour mixture into the yeast mixture and work the dough for about 7 minutes. The dough will pull away from the sides when ready in a workable ball (see above). If the dough is too wet, add more whole wheat flour a 1/4 cup at a time until the dough is workable.

Grease a large bowl with olive oil and plop the dough inside. Wet a lint-free towel until it is damp. Lay it over the bowl and place in a dark place. (I use the oven). Let it sit for 1-2 hours. (When pressed for time, 1 hour has worked fine.) The dough will have doubled in size. Take it out. Pull the dough from the sides and fold it over itself a few times. Cover with the towel again and let sit again for 1 more hour. It will rise again.

Coat a dutch oven with olive oil on all sides and even the bottom of the cover. Heat oven to 425˚, placing the Dutch oven bottom in there while preheating. The Dutch oven will create a crisp crust if it is hot.

When the oven is at 425˚, pull out the Dutch oven and sprinkle the insides with a handful of corn meal. Pull your dough away from the sides of the bowl again, fold it over a few times on itself, then plop into prepared Dutch oven. You can hear it sizzle as you plop it in, which means you have your pot hot enough. With a sharp knife or kitchen scissors, cut 3 slits along the top of the dough and cover with the oiled cover. Bake for 30 minutes. Uncover and bake for another ten minutes, or until crust is crisp and golden. Flip bread onto a cooling rack before cutting. Serve warm.
Email Post
Labels: artisan bread easy Bob's Red Mill bread mix no knead bread olive oil bread pine nuts in bread very fast no knead multigrain bread