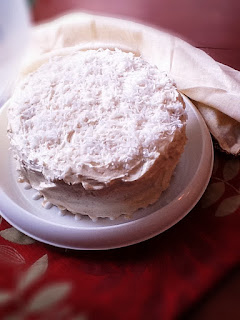 We had a recent dinner party with my 'n laws that thematically involved a lot of Latin cuisine and flavors. I opted for dessert (of course) , yet became concerned when all I could find were flan, fried ice cream and chocolate filled empanadas. I was looking for a cake of some sort, and I found this cuatro leches cake on kitchn.com. I changed up quite as few things, but the essence of the cake-a light yellow cake soaked in a 4-milk glaze overnight-stayed the same. I made a richer, creamier frosting for it, and added a pineapple jelly to the layers. All in all, its a creamy, tropical fiesta in your mouth! 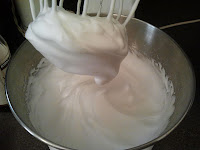 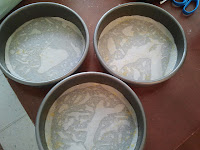 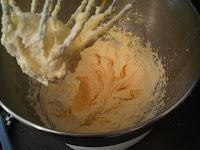 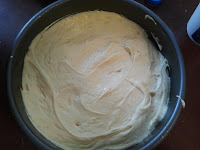 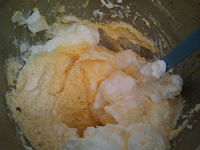 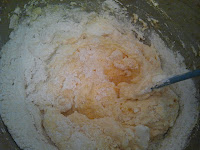 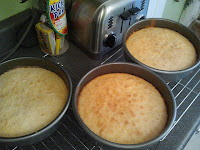 Preheat oven to 350˚.  Spray 3  9"x2" round cake pans with nonstick cooking spray. Cut parchment paper in 3 circles to fit at  the bottom of each cake pan. Place them there and spray again. Set them aside.

In a small bowl, mix the cake flour and baking powder. Set aside.

In a large mixing bowl. whip the butter and 3/4 cup sugar until light and fluffy. Add the evaporated milk, then add the yolks, whipping until thick and lemon colored. Add the vanilla and whip some more. Set the butter mixture aside. Clean your beater attachment very well, and use a fresh clean bowl. Put the egg whites in this bowl, and whip whites until soft peaks form. While still beating, add the last 1/4 cup sugar until whites are glossy and stiffer peaks form.

Pour the cake batter evenly into each prepared pan and bake on the middle rack for 20-25 minutes. The cake will spring back to the touch and a toothpick will come out clean, and there will be a very light, golden color to your top and edges. Let cool on wire racks, inverting them out their pans and peeling off the parchment after about 10 min. 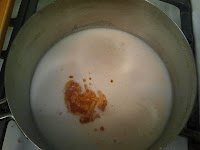 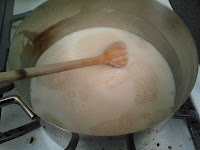 While cake is baking it is time to make the milk glaze. This is what makes this cake special. In a medium size saucepan, mix all the milks and vanilla. Cook on medium hat until bubbling. Let it simmer and bubble for about 10 minutes. you want to cook the milk until it gets to be as thick as the consistency of evaporated milk. Set aside and let cool to room temp. 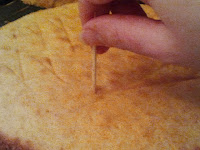 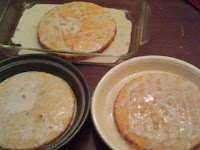 In 3 large pie pans and/or Pyrex pans, pour a thin layer of the milk glaze. With a toothpick, poke holes gently on both sides of the yellow cake layers. This will help the cake absorb the glaze. Place each cake in each pan, right on the milk glaze. Now pour and even amount over the top of each. Cover with plastic wrap and chill over night (or at least 8 hours). 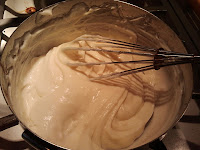 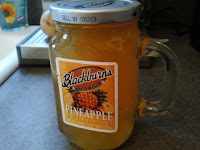 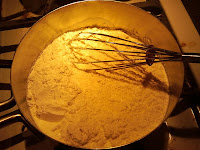 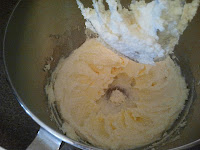 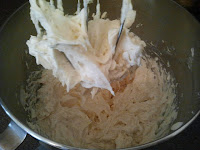 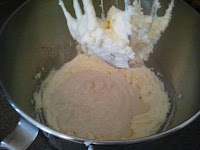 For the frosting, heat the milk, cream and flour in a small sauce pan, whisking constantly. Cook the milk until it becomes a thick "custard". Set aside to cool to room temp. (if this is too warm it will cause the butter to melt and separate.) Whip the butter and sugar until light and fluffy. Add the milk custard and the vanilla, whipping until light and fluffy. Chill lightly until ready to use. If the frosting gets too stiff in the fridge, let it sit out at room temp until you can work with it.

Also, in a small sauce pan (or microwave) heat up the pineapple jelly until it is spreadable as well. Set aside. 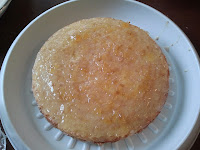 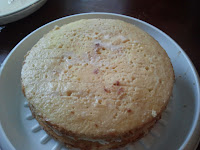 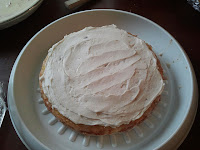 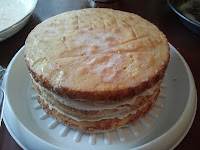 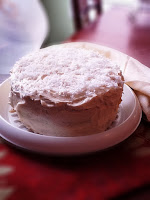 Now it is time to build. Using your serving platter, place one glaze-soaked cake on the bottom. (I used spatulas to help me lift them out of the moisture so they did not tear off the pan or break. Be gentle and don't rush.) Spread half the jelly evenly on top. Then spread a layer of vanilla frosting over the jelly, careful not to disturb the jelly layer. The jelly stiffens up as it sits on the chilled cake, so it won't give you too much trouble. Layer a second cake layer on top. Cover it with the last of the jelly and some more frosting. Add the 3rd cake layer. Now spread a thin crumb layer of frosting over the whole outer of the cake. Wipe your frosting spatula clean, then thoroughly frost the cake. Sprinkle the top with the coconut. Wipe the edge of your serving platter clean with a wet paper towel and VOILA! Time for a fiesta!
Email Post
Labels: coconut dessert cuatro leches cake fiesta birthday cake latin dessert mexican dessert pineapple dessert tropical sweets