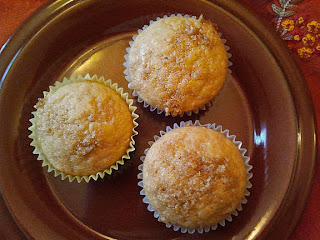 I recently finished a school project with my daughter about the Northeastern States. She had to collect a handful of recipes that were representative of those states. She really wanted to make sure she had a handful of maple and apple recipes in her cookbook. And in typical Mother/Daughter style, we could not agree on which muffin recipe to choose. One was a simple traditional recipe from historical sites in the Northeast that she wanted to use. However I found a recipe in a Time-Life series we own about regional cooking that had maple and hazelnuts in it. Of course, it was her project, and she won. But, we had to make something from the cookbook to bring to class. I decided to add maple, milk, apple sauce and extra spices to the recipe-after all, I have a baking reputation to uphold in her class! The recipe my daughter chose was a little too plain for my tastes. This recipe yielded 24-28 medium size muffins.

Place a paper liner in each muffin tin and set aside. Preheat oven to 350˚. In a large bowl, mix dry ingredients with a fork (flour, sugar, nutmeg, cinnamon, salt, baking powder). In another bowl, whisk eggs with milk until lightly beaten. Add oil, apple sauce and maple syrup, and whisk until mixed. Add half the liquid to the flour mixture and whisk to combine. Add the rest of the liquid and whisk with either a whisk or fork until just combined. Do not overmix.

With a tablespoon, pour the batter into each liner to about 2/3 full. Sprinkle a little brown sugar on top of each. Bake for about 20-25 minutes until puffy and lightly golden. Let cool for 10 minutes, then pull out the muffins to put on a cooling rack to cool completely.
Email Post
Labels: baking breakfast muffins Maple Syrup Northeastern Apple Maple Muffins