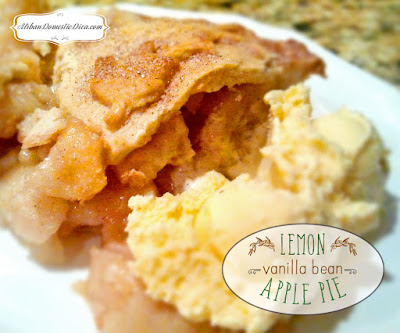 I have many apple pies on my blog, the main reason being that I have tried many versions over the years in hopes of winning our parish's fall apple pie contest. I finally won first place this year with an Apple Maple Sage Brown Butter Pie. That pie, and many others I have baked, are earthy and deep in profile. A few weeks ago, I wanted to use up some apples from the orchard in a pie to bring to a friend's home for dinner. This recipe caught my eye in an old William Sonoma Thanksgiving Cookbook I got from the library. The reason being, it had real vanilla bean and lemon mixed with the apples. My friends commented that the pie was "sunnier" and "brighter" in flavor than other pies, yet had a creaminess about it that the vanilla bean created.

I varied the recipe in the manner of baking as well as additions to the pie crust, and precooking the apples in a pan before adding to the crust. I would recommend cooling the apples down a bit before adding the top crust. I did not and my beautiful crust began breaking and cracking as it kind of melted as I placed it on top. It still tasted great even though it would not have won a beauty contest!

We enjoyed this pie with vanilla gelato and a lovely cup of coffee with the company of good friends on a fall evening after pumpkin picking. Who could ask for anything more? 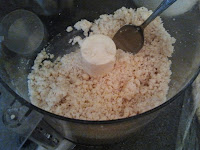 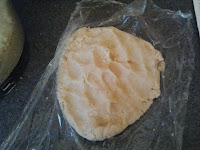 In a food processor, pulse the flour with the baking powder and sugar. Add the shortening and butter, and pulse until mixture looks like coarse meal. In a small bowl, beat the egg with a tablespoon of water. Add to the flour and pulse a couple times, Sprinkle the cider vinegar and vanilla and pulse again. Pinch the flour with your hands. Will the dough stick together to form a dough easily? If not quite, add another tablespoon of water and pulse a few more times. Pinch again. Add water little by little until dough forms by pinching. Form into two even balls between plastic wrap and flatten into two round 1/2 disc. Chill in the fridge at least 1 hour or overnight to let the gluten rest. 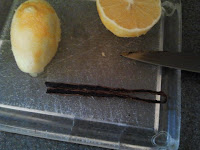 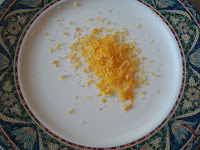 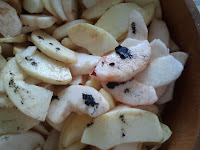 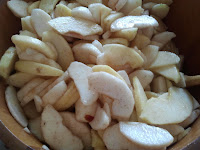 Toss your apples in a large bowl with the sugar, lemon zest and lemon juice, cinnamon and nutmeg. Scrape the vanilla beans out of the pod halves with a small knife and scrape beans onto the apples and mix. Let macerate for at least 1 hour and up to 3. 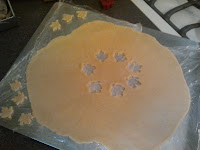 While apples are macerating, roll out your bottom crust dough between lightly floured plastic wrap, and flip into the pan, pressing it down and trimming the overhang about 1/2" away from the edge. Roll out your top crust so that it is about 11" in diameter. If I want to have leaf shapes be the steam holes, I cut them out at this point while the dough is flat. I eyeball the center and work around it in a circle. Let all the dough chill again for at least 30 minutes to let the gluten relax again.

While dough is chilling, position oven rack to it's lowest position in the oven. Place a foil-lined baking sheet or baking stone on it and heat oven to 400˚ for at least 20 minutes before baking the pie. You want the pan to be nice and hot so it sears the pie crust so it doesn't get soggy while baking. 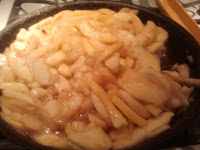 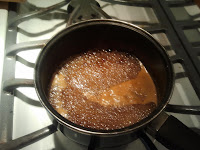 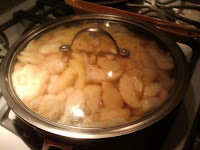 Drain the apples in a colander, reserving the juices in a small saucepan. Boil the juices over medium heat until reduced down to 1/3 of a cup and well caramelized. Set aside. Meanwhile, while that is going, melt the 2 Tbsp. butter in a large skillet with a cover, and sauté the apples in the butter on medium-high heat, tossing occasionally, and keeping things covered so they soften quicker. Cook for about 10 minutes. Let cool down for 15-20 minutes or so to help the crust not meltdown and crack while assembling.

To assemble, toss the softened apples with the reduced down juices and the cornstarch. Pour into prepared pie shell. Place top crust on top and trim edge to 1/2" away from the edge and fold under the bottom edge and crimp with your finger or fork as you go. Decorate with extra dough pieces if you like. 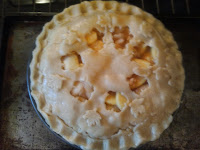 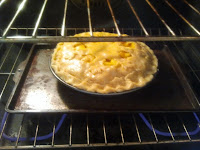 Place directly on the baking sheet and bake until lightly golden and apples are beginning to bubble. If the crust is browning too fast or apples are not bubbling but the crust is getting too brown, either cover the edges with tinfoil or tent the pie completely with foil, making sure there is a steam hole. This slows down crust browning while apples catch up. 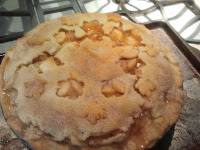 After about 45 minutes, take the pie out and brush with milk or cream. Mix the sugar and spices for the glaze, and sprinkle evenly on top of brushed milk. Bake until nicely golden, about 15-20 minutes more, covering the edges with foil again if things are getting too brown.

Cool on a wire rack for 2 hours to set and serve.