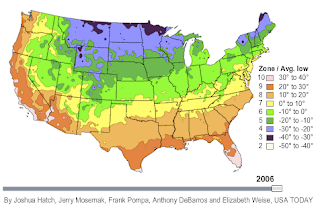 Last year, I began wondering if cold zones were changing. My garden bloomed so early, and it seemed that the winters were becoming ever so slightly milder year by year (excluding the year we had dismally few sun spots, thus a cooler winter/year overall). Things in my yard just seemed to be way ahead of schedule as of late, and this spring is no different. In fact, it is even more so, with my spring bulbs blooming this week. Last year, they were blooming for Easter pictures...over two weeks away!

Now, I know there is a big debate if global warming is real or not, and there are some of you out there that may not believe it is happening. That's fine by me! But being a gardener means having a sixth sense about weather. We become like our own plants. We feel rain is coming before the forecasters do, and we can sense if it will be an early fall or spring. Trust me about this. It's a wonderful thing to be that in tune with your surroundings, and to be a good gardener, you have to be. It's all about your surroundings! And I have had this feeling that things have been changing.


So, long story short, I did some research and came across this article from USA Today. I have included it below for you to read. It was very interesting. But what was WAY more interesting was the cold zone maps they highlighted, which I have put here for you to see. Basically, the USDA cold zone map is very old. It was last updated in 1990, and it was based on weather patterns as far back as the 70's. The funny thing is, most nurseries all kind of know the map is out of date, they just don't speak about it. In fact, no one speaks about it.

"At nurseries across the nation, it has become common knowledge that the government's climate map is out of date. And yet the nursery industry, which had $16.9 billion in wholesale sales in 2006, has joined the USDA in taking a conservative approach to changing the map.
A big reason: money.
Nurseries commonly offer money-back guarantees on plants. Analysts say many in the industry are worried that adjusting the climate maps would encourage customers in cooler areas to increasingly buy tender, warm-weather plants unlikely to survive a cold snap." -USA TODAY
Concerns about cold zones grew and the National Arbor Day Foundation followed weather patterns from 1991-2005, and noticed a movement of the cold zones shifting northward. They wanted to update the map. The USDA map from 1990 was based on weather patterns from '74-'86. The USDA is saying they won't change the map because there needs to be longer weather analysis done. But '74-'86 is not much longer than The National Arbor Day's analysis from '91-'05. So why not entertain it? Many people think they won't to minimize the highly charged global warming discussion. If the USDA changes it, it will be like them stating that global warming is real...and that's getting too political. So the National Arbor Day made their own map anyway, shown above. But why else won't the USDA look at cold zone updates?

I think the money questions is interesting, as well as the affect on the economics of agriculture in the country. However, with the right information, don't we all become better gardeners, commercial farmers as well as little old me? It seems best stated here, "There are nurserymen who are excited about the new market" for plants in the northern half of the United States, Ellis says. "There are the ones who see … it as a marketing opportunity."
I think at the end of the day, we should be conservative with our plantings. If it is an investment plant, like a tree or a special shrub, don't buy out of your traditional zone. If it's small perennials or something on sale, give it a try and see how it does. Experimenting gets expensive, money back guarantees or not. The article finishes by saying that at the end of the day, use your neighbors and neighborhood as a guide. No one is going to  know what works on your land than someone working similar land a few houses away. Find out what works. Become part of a local garden club or get to know the local, privately owned nursery. As said in the article, "Nobody is more familiar with soil and weather conditions in your yard than the person down the street with the beautiful garden," he says, "because usually what went into making that garden was a lot of mistakes and dead plants." I know I, myself, leave a trail of dead plants to take us to the next ice age!