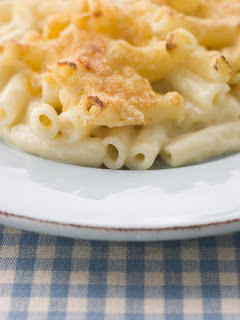 This Mac & Cheese recipe was outstanding on a lot of different levels. First, it was just plain REALLY good. It is very rich and cheesy, great for kids and adults a like. The second reason why this was outstanding was that it easily will feed a mob, no joke. We made this for my daughter's karate school's Halloween party. There were easily 100 people there. Everyone was supposed to bring a dish, and as usual pot lucks go, many people "lamed out" and brought only crackers or chips. There were very few solid entrees to eat. And as we watched these same adults pile their plates high with our mac & cheese and other scarce proteins, my husband became angrier and angrier. To top it off, many of these adults were eating before the children got to eat-which is incredibly selfish...but I digress. We waited until most everyone ate before we went up, and I was shocked that there was still a good third of the macaroni still left. I was able to calm my husband down, assuring him there would be plenty for anyone that hadn't eaten yet. So rude, lame parents aside...this macaroni dish will feed many people! We used the Rival electric baking dish to keep it warm after baked, but you can bake it right in there if you want to make some for Thanksgiving-freeing up your oven. (for a review of this pan, visit my post: http://www.urbandomesticdiva.com/2009/04/cooking-rival-skillet-has-saved-my.html)  We are going to make it as a side for the 13 kids descending on our home this holiday. This recipe was adapted from the Gooseberry Patch cookbook for Church Suppers, and has many great "feed a mob" recipes. Their cookbooks are charming and old fashioned, a great addition to your cookbook collection.
Amazing "Feed a Mob" Macaroni and Cheese
Ingredients
10 cups (about 36 oz.) elbow macaroni, uncooked
3/4 cup butter
1 1/2 cup flour
4 cups milk (2 more cups if needed)
1 1/2 lb. Velveeta, cubed
16 oz. shredded sharp cheddar cheese
1 1/2 cup bread crumbs and
another 4 Tbsp. butter
Directions
Prepare macaroni to package directions in a very large stockpot. Drain and leave in the colander for the time being. In the same stockpot over medium heat, melt 3/4 cup butter. Add the flour and whisk into a rue (a smooth paste). Continue whisking while adding the milk slowly to blend well and begin to thicken. If feeling a little too thick, add milk a half cup at a time as needed until smooth and creamy. Stir in the Velveeta until melted and smooth. Add the shredded cheese and stir until melted. Add the cooked macaroni and stir until all well coated and combined. Turn off heat. Lightly grease a 15" x 12" deep pan. Pour the macaroni evenly into the pan. In a small skillet, melt 4 Tbsp. butter and add the bread crumbs. Toss the bread crumbs in the butter until well coated and toasted. Sprinkle evenly over the top of the macaroni. Bake uncovered at 350˚ for about 30 minutes, until golden and bubbly.
Email Post
Labels: easy macaroni feed many Macaroni and Cheese pot luck dish pot luck issues